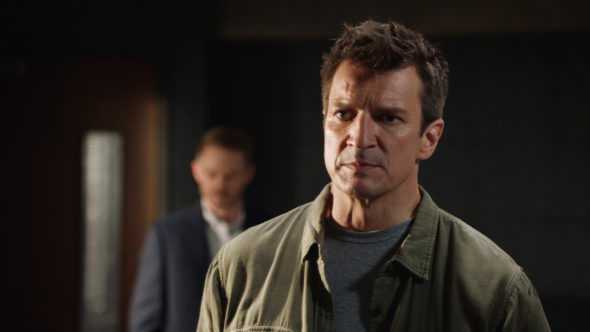 Will justice prevail? Has The Rookie TV show been cancelled or renewed for a fourth season on ABC? The television vulture is watching all the latest cancellation and renewal news, so this page is the place to track the status of The Rookie, season four. Bookmark it, or subscribe for the latest updates. Remember, the television vulture is watching your shows. Are you?

Airing on the ABC television network, The Rookie TV show stars Nathan Fillion, Alyssa Diaz, Richard T. Jones, Titus Makin Jr., Melissa O’Neil, and Eric Winter. The series follows the experiences of John Nolan (Fillion), a middle-aged divorced man from Pennsylvania. He owns a construction company but decides to give up his old life to pursue a new career as a police officer in the Los Angeles Police Department. He graduates from the Police Academy and becomes the oldest rookie on the force. He works with Sergeant Wade Grey (Jones), training officers Angela Lopez (Diaz) and Tim Bradford (Winter), and fellow rookies Jackson West (Makin Jr.) and Lucy Chen (O’Neil). As season three begins, John nears the end of his training and must come to terms with the choices he made in pursuit of the truth.

The third season of The Rookie averaged a 0.49 rating in the 18-49 demographic and 3.73 million viewers. Compared to season two, that’s down by 24% in the demo and down by 14% in viewership. Find out how The Rookie stacks up against other ABC TV shows.

Will ABC cancel or renew The Rookie for season four? Though viewership isn’t great, I can’t see the network canceling this drama series at this point. I’m sure it will be renewed. I’ll update this page with breaking developments. Subscribe for free alerts on The Rookie cancellation or renewal news.

5/14/21 update: The Rookie has been renewed for a fourth season on ABC.

What do you think? Are you glad that The Rookie TV show has been renewed for a fourth season? How would you feel if ABC had cancelled this TV series, instead?

We have REALLY enjoyed this show. We look forward to it each week. That said, we do not like the new recording format.
It is dizzying, difficult to follow, & destroys the ebb & flow of each sequence.
Hopefully it’ll be restored to the original
photographing format/style.

A little less PC preaching would be nice e.

good show my family enjoy it. Lots of interaction between color and white. it is simular to Blood Blood.

I love it, all of the great characters and wonderful acting.

I am more enthralled by The Rookie each year. The network would have made a big mistake to disregard this high quality offering! I’m glad it was renewed.

The Rookie is an amazing show. I flipping love it.

I love this show. I very good my opinion