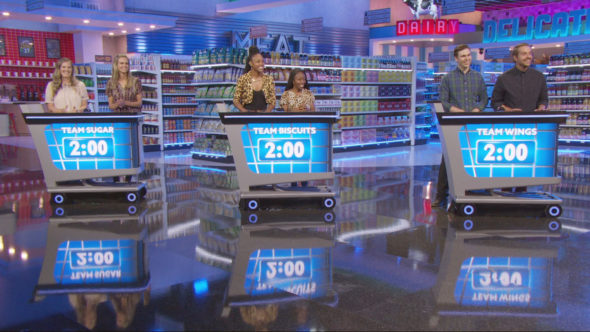 Are your shopping carts ready? Has the Supermarket Sweep TV show been cancelled or renewed for a second season on ABC? The television vulture is watching all the latest cancellation and renewal news, so this page is the place to track the status of Supermarket Sweep, season two. Bookmark it, or subscribe for the latest updates. Remember, the television vulture is watching your shows. Are you?

Airing on the ABC television network, the latest version of Supermarket Sweep is hosted by comedienne Leslie Jones. A fast-paced competition series, the show follows three teams of two friends or relations. Back-to-back games follow the teams, clad in iconic colorful sweatshirts, as they compete against one another using their grocery shopping skills and knowledge of food store merchandise. Teams compete against each other for the chance to become the winning duo to play in the “Super Sweep,” a race against the clock to find five products in order to win $100,000.

Will ABC cancel or renew Supermarket Sweep for season two? Earlier incarnations of this series have been beloved by viewers and ABC has made game shows a staple of its summer schedule. I believe that Supermarket Sweep will be renewed for Summer 2021. I’ll update this page with breaking developments. Subscribe for free alerts on Supermarket Sweep cancellation or renewal news.

5/14/21 update: Supermarket Sweep has been renewed for a second season on ABC.

What do you think? Are you glad that the Supermarket Sweep TV show has been renewed for a second season? How would you feel if ABC had cancelled this TV series, instead?

yes i am glad.but i wish they could have brought david prupeck back because he did a much better job of hosting supermarket sweep than leslie jones does.and she uses alot of vulgar langage.where david prupreck was more cleaner with his words too.

Great show has huge challenges, assume competition, and knowledge bring it back on

I am so happy Supermarket Sweep has been renewed. I love Leslie Jones and I love the show

That Leslie person is still loud and obnoxious! She makes rude comments to the contestants and then laughs! Please boot her off the show! I’m sure there’s a decent game show host out there, it’s not Leslie!