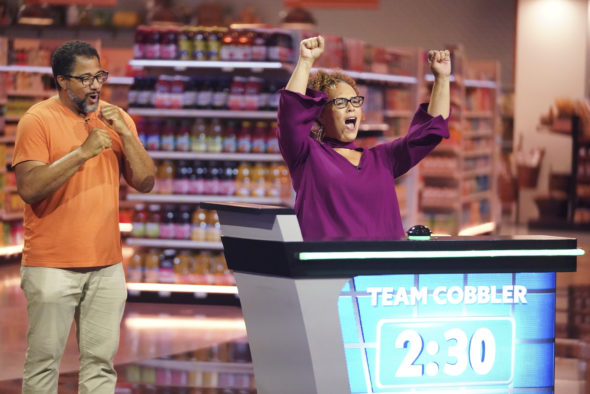 An ABC game show revival, the latest version of Supermarket Sweep is hosted by comedienne Leslie Jones. A fast-paced competition series, the show follows three teams of two friends or relations. Back-to-back games follow the teams, clad in iconic colorful sweatshirts, as they compete against one another using their grocery shopping skills and knowledge of food store merchandise. Teams compete against each other for the chance to become the winning duo to play in the “Super Sweep,” a race against the clock to find five products in order to win $100,000.

What do you think? Which season one episodes of the Supermarket Sweep TV series do you rate as wonderful, terrible, or somewhere between? Do you think that Supermarket Sweep should be cancelled or renewed for a second season on ABC? Don’t forget to vote, and share your thoughts, below.

*5/14/21 update: Supermarket Sweep has been renewed for a second season on ABC.

Love the show . But the host is over the top. Get a new host please!

The supermarket sweep was one of my favorite shows and love the reruns, ..til they brought on Leslie Jones. The constant screeching voice is daunting and annoying. If I want to be entertained by near screams for 30 minutes I call my mother and listen to her complain about the landlord.

Love the concept of the show, cannot stand the host, over bearing and loud, don’t see the point of the guy she asks, what do I always say. I think sometimes she brings show to a sleazy level. Find a new host you have a hit.

I love supermarket sweep! It is fun and exciting. I do not like the hostess, Leslie
Jones. In my opinion she is obnoxious. I hope the show
Will be renewed with a new host. I believe with a new host the show will be very successful. You may even consider
Moving it from a night time slot to a day time slot. Good luck!

The new Supermarket Sweep with Leslie Jones is my favorite game show. I look forward to watching it every Sunday and wish that it came on everyday like other game shows. I am disappointed that it has not come on in the last 2 weeks. I read some of the other comments that were posted and I know that everyone is entitled to their opinion, but what’s wrong with a lively game show? Leslie’s liveliness makes the game more fun and exciting to watch.

I was excited & happy that this game show was coming back to TV, My family including me & my sister watched Sweep growing up back when it was on both Lifetime and later PAX (now currently Ion) hosted by David Ruprecht, but gave up watching it because of her constant screaming & yelling that she does on this reboot is way too loud, at least she could’ve toned it down!
Couldn’t they find a better person to host this revival instead of Leslie?

I think supermarket sweep would be much better with a new host. Do not like the screaming from host. She’s a big mouth.

I’m calling BS on the voting… I’ve voted on the last episode when it only showed 3 votes, my negative vote has no effect. Somehow, I’m not surprised!

As it says at the bottom of the chart, “Votes are cached so there may be a delay before your vote is visible.” Thanks for your kind comment.

Love the show but not a big fan of the host and her side kicks, grocery man. Please find a new host with a calming demeanor.

Please cancel it, even reading subititles, Leslie gave me a headache!

We tried to watch the new supermarket sweep and started each episode amped up that it would be as fun as the old one. It was too confusing, not fun snd felt forced.

Watched 2 times , kind of a stupid game show, maybe it will grow on me.

Love the show Super Market Sweep….glad it is back…

I surprised that love Supermarket sweep when I turn on the show Sunday night.