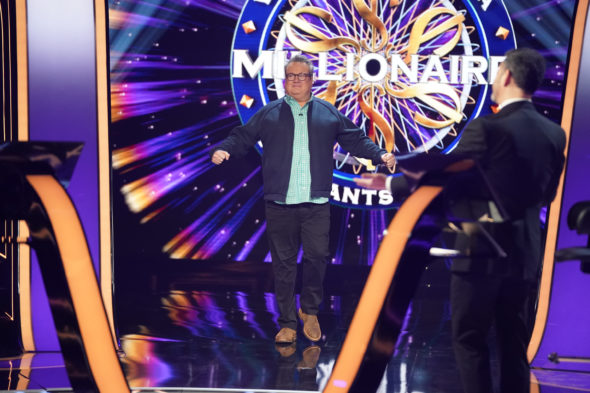 An ABC game show, this incarnation of Who Wants To Be A Millionaire is hosted by late night’s Jimmy Kimmel. Celebrity contestants play the game for charity and answer increasingly difficult multiple-choice trivia questions for increasing amounts of money. Meanwhile, an interactive game app allows viewers to play along from home, to compete to win the same amount of money that the celebrities are playing for on the show. For the first time in the history of the U.S. franchise, celebrities playing the game show can invite a guest to help them answer questions. Additionally, this incarnation introduces a new lifeline, called Ask the Host.

*5/21/20 update: Who Wants to Be a Millionaire has been renewed for a second season on ABC.

They NEED to change the phone a friend!!! 30 seconds is VERY unfair!!!L. How cheap of you!!! Even starting the 30 seconds AFTER they have read the question may not be enough! Change this for heaven sakes!

ABSOLUTELY agree. Ask the question, then start the timer.

I liked the old shows better. Bring back the daily shows. Why were they ever discontinued?