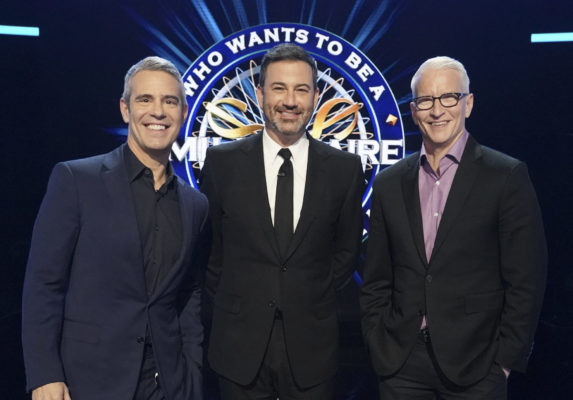 The iconic ABC game show will be back in primetime for a second season. Who Wants To Be A Millionaire, which currently airs on Thursday nights, has been renewed for the 2020-21 broadcast season.

This revival of Who Wants To Be A Millionaire is hosted by late night’s Jimmy Kimmel. Celebrity contestants play the game for charity and answer increasingly difficult multiple-choice trivia questions for increasing amounts of money. Meanwhile, an interactive game app allows viewers to play along from home, to compete to win the same amount of money that the celebrities are playing for on the show. For the first time in the history of the U.S. franchise, celebrities playing the game show can invite a guest to help them answer questions. Additionally, this incarnation introduces a new lifeline, called Ask the Host.

The first season of Who Wants to Be a Millionaire currently averages a 0.81 rating in the 18-49 demographic and 5.43 million viewers. It’s a middle-of-the-road performer when stacked up against the other unscripted TV shows on ABC.

What do you think? Have you been enjoying this celebrity version of Who Wants to Be a Millionaire on ABC? Will you be watching season two?

I liked it better when it was everyday people and probably won’t be watching it , it used to be my favorite game show so disappointed

I enjoyed the celebrities playing for charities. We then hear of different charities than need help.

Celebrity game shows shows usually not my thing, but I really like this one so far. Don’t know why it’s not been on the past two weeks, but hope to see it again soon.

Yes I really enjoyed the show. I am looking forward to the 2nd season.

I stopped watching partway through the third episode. It’s much more compelling to me to watch real people try to change their lives than to watch celebrities over-act while trying to answer questions.

I love the game and miss it, but won’t watch further celebrity editions.

Yeah, that’s why I haven’t really watched it. I’m fine with there being celebrities sometimes, but they should still have everyday contestants. At least there’s Celebrity Family Feud and still regular Family Feus.

I’ve enjoyed it when there was a celebrity on the show that I wanted to watch. Otherwise, I skipped the episode.