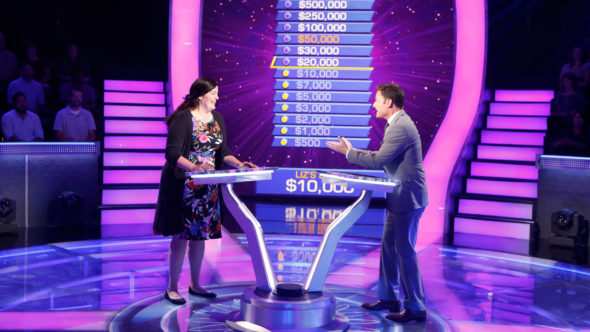 Talk about a final answer. The daytime, syndicated version of the Who Wants to be a Millionaire TV show has been cancelled, so it will not return for the 2019-2020 television season. The game show originally premiered in August of 1999 as an ABC primetime TV series, hosted by Regis Philbin, before its cancellation in June of 2002. It then returned to air as a syndicated daytime game show, in September of that year, and where it has enjoyed a long, prosperous run.

Syndicated by Disney-ABC Home Entertainment and TV Distribution, Who Wants to Be a Millionaire is currently hosted by Chris Harrison of Bachelor fame. Meredith Vieira was its first host in syndication from 2002 to 2013, followed by Terry Crews for two years, before Harrison assumed the podium in September of 2015. During the quiz show, contestants attempt to answer a series of 14 questions, with each one worth more money than the last. They generally can employ three lifelines (currently “Ask the Audience,” “50:50,” and “Plus One”) to help them on their journey toward the million dollar grand prize. Notably, there have been very few $1,000,000 winners in the total of 20-year life of the game show. .

“Who Wants to Be a Millionaire” is coming to an end.

Variety has learned exclusively that the syndicated game show has been canceled. To date, it has aired nearly 3,000 episodes, including over 300 when the show aired on ABC.

“After a successful 17-year run, ‘Who Wants To Be A Millionaire’ will not return in national syndication for the 2019-20 season,” a show spokesperson told Variety.

What do you think? Were you still watching the Who Wants to Be a Millionaire game show TV series? If it were up to you, would it be cancelled or renewed for the 2019-2020 television season?

What a shame! There aren’t to many shows with this type of entertainment. I rank it right there with Wheel of Fortune and Jepordy. Bring it back please.

Very disappointing! I looked forward to seeing it every day

Yes I watched it from Day 1. So disappointing.

Somehow I did not know the show was going off the air. I have watched it for years and always looked forward to it. I watch few shows on TV so it saddens me that Who Wants to be a Millionaire is gone. I would love to see it continued.

We have enjoyed Who Wants to be a Millionaire for a long time and would like to see it return.

We miss the show with Chris Harrison who added class and smoothness to the game show. A pleasant break in the endless talk/chatter offerings, a mistake indeed. Bringing back without Harrison would be a flop.

TV will be turned off after the news at noon. The ONLY reason we kept it on was to watch Who Wants To Be A Millionaire. Disappointed with ABC.

We looked forward to our “Millionaire” fix every day. Now our afternoons are a wasteland. And Chris Harrison was a great host!

How could you have cancelled Who Wants to be a Millionaire?? Loved that show and Chris was a fabulous host. There are so many crappy shows on and you take a good show and cancel it Whar sense does that make? We’re you running out of money for it? PUT IT BACK ON! And not at 2 am!

Renew Who Wants To Be A Millionaire!

A great show! Great for kids and adults alike. This is good for all audiences in contrast to half of what else is on/junk/ horrible shows on tv. PUT IT BACK ON!

Disney cancelled “The Chew” so I don’t want their channels any more.

Please put it back on, it was not only entertaining but informative and it was teaching every subject! It was a show The whole family could watch and participate in…come on guys. There is to much garbage on TV and this show was great‼️