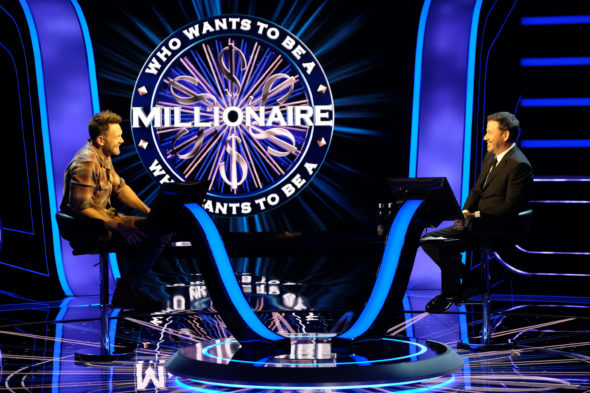 Who will win the big money and who will embarrass themselves? Has the Who Wants to Be a Millionaire TV show been cancelled or renewed for a third season on ABC? The television vulture is watching all the latest cancellation and renewal news, so this page is the place to track the status of Who Wants to Be a Millionaire, season three. Bookmark it, or subscribe for the latest updates. Remember, the television vulture is watching your shows. Are you?

Airing on the ABC television network, Who Wants to Be a Millionaire is hosted by late night’s Jimmy Kimmel. As in the original versions, contestants try to answer multiple-choice trivia questions for ascending amounts of money, with the hopes of winning the million-dollar prize. Players can take advantage of lifelines to help them answer questions and get further in the game. In this version, the lifelines are “Ask the Host” (replacing “Ask the Audience”), “50/50”, and “Phone a Friend”. Contestants can also invite an expert guest (anyone of their choosing) to help them answer questions. In the second season, the contestants are celebrities (playing for charities), frontline heroes, and others affected by COVID-19. Celebrity contestants include Tiffany Haddish, Joel McHale, and Julie Bowen.

Will ABC cancel or renew Who Wants to Be a Millionaire for season three? This game show has been very successful in the past, seems relatively inexpensive to produce, and can use celebrities to help promote their other ABC shows. I think it’s a shoo-in for a third season renewal. I’ll update this page with breaking developments. Subscribe for free alerts on Who Wants to Be a Millionaire cancellation or renewal news.

1/22/22 update: Who Wants to Be a Millionaire has been cancelled.

Who Wants to Be a Millionaire Cancellation & Renewal Related Links

What do you think? Were you hoping that the Who Wants to Be a Millionaire TV show would be renewed for a third season? Are you sorry that ABC cancelled this TV series, instead?

RENEW WHO WANTS TO BE A MILLIONAIRE (MILLIONAIRE)

Please keep Who wants to be a millionaire on! With Jeremy Clarkson. I LOVE THE PROGRAMME

Please do not cancel who wants to be a millionaire

Yes we love watching it especially our 7 year old son loves watching! We watch it as a family of 3!

I love Millionaire!! Jimmy Kimmel is the best host ever. He outshines every other host. Please renew this show.

Jimmy Kimmel is a terrible Millionaire host. He has zero personality and ruins it. I’d love to see it return with a different host

I love Jimmy Kimmel and think he is the best host ever. Please don’t cancel. I look forward to seeing this every week.