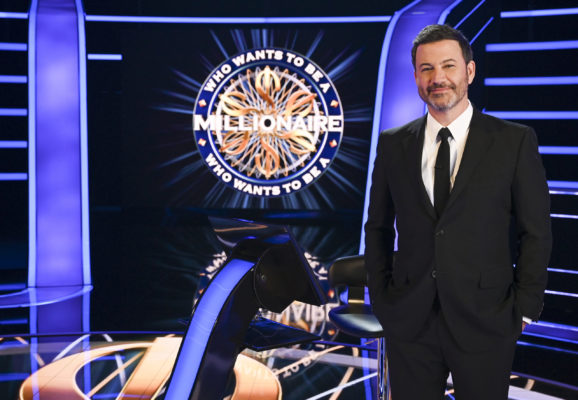 You may want to “phone a friend” with this news. ABC has decided against ordering a third season of the  Who Wants to Be a Millionaire TV show, at least for now.

A revival of the long-running primetime and syndicated quiz show, Who Wants to Be a Millionaire is hosted by late night’s Jimmy Kimmel. As in the original versions, contestants try to answer multiple-choice trivia questions for ascending amounts of money, with the hopes of winning the million-dollar prize. Players can take advantage of lifelines to help them answer questions and get further in the game. In this version, the lifelines are “Ask the Host” (replacing “Ask the Audience”), “50/50”, and “Phone a Friend”. Contestants can also invite an expert guest (anyone of their choosing) to help them answer questions. In the second season, the contestants are celebrities (playing for charities), frontline heroes, and others affected by COVID-19. Celebrity contestants include Tiffany Haddish, Joel McHale, and Julie Bowen.

The second season of Who Wants to Be a Millionaire averaged a 0.46 rating in the 18-49 demographic and 3.15 million viewers. Compared to season one, that’s down by 44% in the demo and down by 45% in viewership. It was one of the network’s lower-rated unscripted series of the regular 2020-21 season.

Deadline reports that the door is being left open to bring the series back at some point but truly, the end result is the same as a cancellation. Any series, particularly an unscripted one, could be revived. For now, there won’t be any new episodes.

What do you think? Did you enjoy the latest primetime incarnation of the Who Wants to Be a Millionaire game show? Would you have watched season three? Are you hoping it does return someday?

Who Wants To Be A Millionaire should be back on the air. Best game show

Loves “who Wants To Be A Millionaire! Watched it everytime it was on!!!!

Woah! Whoever cancelled this game show was a big mistake and it was well done brought back and I loved Kimmel hosting it better than Chris Harrison did. And there was history back in 2020 when David Chang won the million dollars and also honoring Regis Philbin. I also loved Terry Crews hosting it. ABC please look at your mistakes and bring back this beloved game show over decades please…..

I’m glad that Jimmy Kimmel doesn’t host anymore, I think Chris Harrison was a way better host than Jimmy Kimmel , he swears too much and he’s not enthusiastic enough when the contestants win money on the show, I’ve been watching Millionaire since Regis Philbin hosted the show, I’ll watch it again only if they get a nicer and enthusiastic host!!!

Wish it would return! Disappointed

ABC stinks for canceling Who wants to be a millionaire, it is a great show with a great host.

What took so long to make that decision?

I didn’t even know there was a season 2– where were the promotions???

I really think they’re making a mistake. I mean, they don’t have to do this. Please reconsider to give Who Wants to Be a Millionaire another chance or find another network to pick it up for next season.

They made the show too easy. There was never any pressure thru the first 7 or 8 questions. Also, a contestant could bring anyone to help thru 10 questions plus maybe 1 more. It is a shame because the show did not need all the extras. That is what drove viewers away.

Please bring back Millionaire!! I loved that show so much.

I hope it comes back.

Great show….I will miss it.

I really enjoyed the show my husband did too. I think it would do better with an audience now that the pandemic is over but it was most enjoyable even with the pandemic. So bring it back.