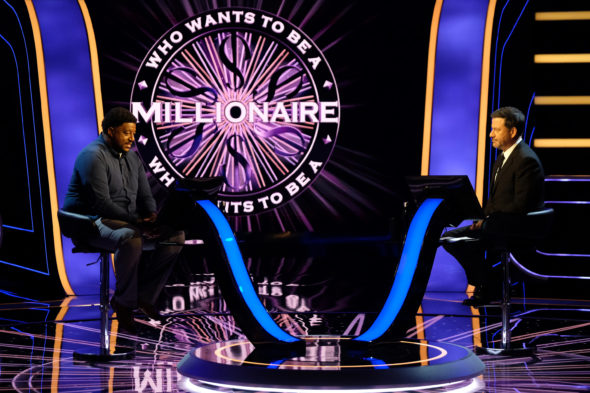 An ABC revival of the long-running primetime and syndicated quiz show, Who Wants to Be a Millionaire is hosted by late night’s Jimmy Kimmel. As in the original versions, contestants try to answer multiple-choice trivia questions for ascending amounts of money in the hopes of winning the million-dollar prize. Players can take advantage of lifelines to help them answer questions and get further in the game. In this version, the lifelines are “Ask the Host” (replacing “Ask the Audience”), “50/50”, and “Phone a Friend”. Contestants can also invite an expert guest (anyone of their choosing) to help them answer questions. In the second season, the contestants are celebrities (playing for charities), frontline heroes, and others affected by COVID-19. Celebrity contestants include Tiffany Haddish, Joel McHale, and Julie Bowen.

Please renew. I thoroughly enjoy the program and Jimmy Kimmel as host is excellent.

Please renew I thoroughly enjoy the show and think Jimmy Kimmel is excellent as the host!

Don’t watch enough to have an opinion

I definitely think it should be renewed. I would love to be on that show

I love the show but someone else needs to be in the chair other than Jimmy K . He has become so political he is no longer funny. Need a fresh face.

Yeah, I would love to see it for the 2nd and 3rd. Maybe I would like to try to be on the game show.

I know that ABC will renewal the show for the second season.