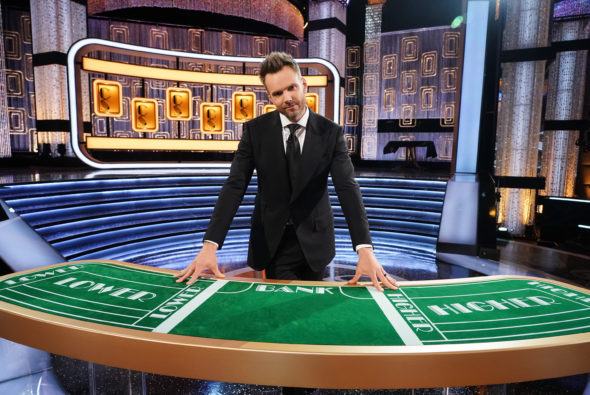 There will be a lot of fun and games this fall on ABC.  The alphabet network has announced premiere dates for several of its unscripted programs. ABC previously announced plans for regular programming to return at its usual time but, due to the pandemic, it seems that some of the scripted shows have been delayed.

They will be joined by a trio of summer game shows which will be resuming their current seasons on September 24th: Celebrity Family Feud (season six), Match Game (season five), and Press Your Luck (season two).

Scripted ABC shows may debut in October and November. You can check our updated network schedule for Fall 2020. Here’s some additional information from ABC:

A DRAMATIC NEW SEASON OF ‘THE BACHELORETTE’ DEBUTS TUESDAY, OCT. 13

NEW SERIES ‘SUPERMARKET SWEEP’ JOINS SUNDAY NIGHT LINEUP WITH ‘AFV,’ ‘WHO WANTS TO BE A MILLIONAIRE’ AND ‘CARD SHARKS’ ALL PREMIERING SUNDAY, OCT. 18

Ending the 2019-2020 season as the No. 1 entertainment network among Adults 18-49 and ranking as the summer’s No. 1 network for the second consecutive year, ABC today unveiled its fall unscripted premiere dates. Details for the network’s scripted series premiere dates will be shared at a later time.

“We’re fortunate to have such a strong unscripted slate to launch our first wave of programming this fall,” said Karey Burke, president, ABC Entertainment. “Presenting the new ‘Supermarket Sweep’ with Leslie Jones alongside fresh, original episodes of returning shows that viewers have come to know and love is invigorating. And with our scripted series ramping up production, we look forward to announcing more premiere dates very soon.”

ABC’s unscripted series premiere dates are as follows (all times listed are Eastern/Pacific). New shows are in bold.

DANCING WITH THE STARS (SEASON 29) –
MONDAY, SEPT. 14 (8:00-10:00 p.m.)
“Dancing with the Stars” is the hit series in which celebrities perform choreographed dance routines that are judged by a panel of renowned ballroom experts and voted upon by viewers at home. The competition begins with an all-new cast of celebrities paired up with the show’s pro dancers, braving the dance floor together for the very first time. Each week these celebrities will endure hours of grueling rehearsals to master new dance styles and technical choreography to perform a dance. In the end, only one star will rise above the rest to be crowned champion and win the coveted Mirrorball trophy.

CELEBRITY FAMILY FEUD (SEASON 6) –
THURSDAY, SEPT. 24 (8:00-9:00 p.m.)
“Celebrity Family Feud,” the iconic game show hosted by stand-up comedian, actor, author and Emmy® Award winner Steve Harvey, features celebrities, along with their immediate family members or their extended TV families, going head-to-head in a contest to name the most popular responses to survey-type questions posed to 100 people for a chance to win money for a charity of their choice. This season’s high-energy matchups continue with Ray Romano vs. Brad Garrett, Kathie Lee Gifford vs. Ricki Lake, Joel McHale vs. Ben Feldman, NFLPA Legends vs. NFLPA Pro-Bowlers, and Fall Out Boy vs. Weezer, among others.

PRESS YOUR LUCK (SEASON 2) –
THURSDAY, SEPT. 24 (9:00-10:00 p.m.)
“Press Your Luck” is a game of wits and strategy hosted by Elizabeth Banks. The stakes have never been higher as contestants try to avoid the iconic and devilish WHAMMY for a chance at life-changing cash and prizes. During each game of “Press Your Luck,” three contestants compete against each other answering questions to earn spins on the Big Board. Contestants then use their spins to win cash and prizes while trying to avoid the WHAMMY, who could take all of their winnings and leave them with nothing. The winning contestant moves on to the bonus game to face the WHAMMY in a final battle for the opportunity to win $1 million.

MATCH GAME (SEASON 5) –
THURSDAY, SEPT. 24 (10:00-11:00 p.m.)
Ladies and gentlemen, it’s time to BLANK! “Match Game” returns for the fall run of season five with Golden Globe® and Emmy Award-winning actor Alec Baldwin at the helm, his famous skinny microphone in hand and a lineup of hilarious celebrity panelists. Produced by Fremantle, the bawdy panel game features four contestants each week vying for the chance to win $25,000, as they attempt to match the answers of six celebrities in a game of fill-in-the-blank.

ABC’s “Match Game” was the No. 1 program in the Sunday 10 p.m. hour among Total Viewers and Adults 18-49 during its run earlier this summer. The series is executive produced by Scott St. John, Alec Baldwin, Mallory Schwartz and Fremantle’s Jennifer Mullin.

THE BACHELORETTE (SEASON 16) –
TUESDAY, OCT. 13 (8:00-10:01 p.m.)
Bachelor Nation, the wait is finally over! Clare Crawley will finally embark on her journey to find true love as “The Bachelorette” returns for its sizzling 16th season on a new night. Clare had women across America cheering from their living rooms when she famously stood up to controversial Bachelor Juan Pablo during the memorable 18th season finale of “The Bachelor.” Clare left the season with a new sense of self-worth and a determination to never settle for anything less than the unconditional love and respect that she deserved. Follow her passionate, wild ride to find her soul mate and the explosive turn of events that will have all of Bachelor Nation talking.

“The Bachelorette” ranked as last summer’s No. 1 TV series among Adults 18-49, marking the first time ever the ABC unscripted series finished as the highest-rated series of the summer. The 15th season of “The Bachelorette” improved over the show’s prior season by 5% with Adults 18-49. Hosted by Chris Harrison, “The Bachelorette” is a production of Next Entertainment in association with Warner Horizon Unscripted Television. Mike Fleiss, Martin Hilton, Nicole Woods, Bennett Graebner, Peter Gust, Tim Warner, Louis Caric and Peter Geist are the executive producers.

SHARK TANK (SEASON 12) –
FRIDAY, OCT. 16 (8:00-9:01 p.m.)
The recipient of the 2017, 2016, 2015 and 2014 Emmy Award for Outstanding Structured Reality Program, “Shark Tank” features The Sharks – tough, self-made, multimillionaire and billionaire tycoons – as they invest in America’s best businesses and products. The Sharks will give people from all walks of life the chance to chase the American dream and potentially secure business deals that could make them millionaires.

Based on 35 days of viewing on linear and digital platforms, ABC’s “America’s Funniest Home Videos” grew over its prior season by 5% in Total Viewers and 12% in Adults 18-49. Vin Di Bona is executive producer, along with Michele Nasraway.

SUPERMARKET SWEEP (SERIES PREMIERE) –
SUNDAY, OCT. 18 (8:00-9:00 p.m.)
The classic TV game show “Supermarket Sweep,” hosted and executive produced by Emmy Award-nominated comedienne and actress Leslie Jones, is a fast-paced and energetic series following three teams of two as they battle it out using their grocery shopping skills and knowledge of merchandise to win big cash prizes. The original format aired on ABC from 1965-1967 and went on to become a global sensation, including runs in the 1990s and early 2000s. It was adapted in 13 international territories and, most recently, relaunched in the U.K. “Supermarket Sweep” is produced by Fremantle. Executive producers include Alycia Rossiter, Leslie Jones, Wes Kauble, Jennifer Mullin and Hunter Seidman.

WHO WANTS TO BE A MILLIONAIRE (SEASON 2) –
SUNDAY, OCT. 18 (9:00-10:00 p.m.)
Hosted by late-night’s Jimmy Kimmel, this season will feature both celebrity contestants playing for the charity of their choice and frontline heroes trying their hand at a $1 million prize. In addition to lifelines, “Ask the Host,” “50/50” and “Phone a Friend,” contestants playing on “Millionaire” can invite an expert guest to help them answer questions. It could be a relative, a beloved teacher or a famed trivia expert – anyone they want – to help them win as much money as they can.

In its debut season, “Who Wants To Be A Millionaire” ranked as the No. 1 program in the Thursday 8 p.m. hour last season among Total Viewers and Adults 18-49. After 35 days of delayed viewing across linear and digital platforms, the show averaged 7.3 million Total Viewers in its freshman season. “Who Wants To Be A Millionaire” is executive produced by Michael Davies and Jimmy Kimmel. The series is produced by Sony Pictures Television’s Embassy Row, Kimmelot and Valleycrest Productions Ltd. The iconic game show is a Sony Pictures Television format that has been adapted in over 120 countries and has won over 65 awards worldwide.

CARD SHARKS (SEASON 2) –
SUNDAY, OCT. 18 (10:00-11:00 p.m.)
“Card Sharks” is a suspenseful game where a fortune can be won on the turn of a single playing card! The road to glory and riches begins with two players who face off in a head-to-head elimination game with the goal of one player making it to the life-changing money card round. In the money card round, the winning player has to make gut-wrenching decisions and risk it all to win it all. Ultimately, players can either take their earned cash and quit or continue wagering for a chance to take home a major cash prize.

What do you think? Are you looking forward to the return of these ABC TV shows this fall?

honestly wondering what the heck happened to that password reboot they said was coming to abc around the same time as match game.

hopefully this winter with all the other game show reboots that are coming around this time but it’s been 4 years so prob not :c

Match game , yes…yes… the rest I don’t really watch . Used to watch Bachelor or bachelorette but too many high schoolers on that show. I guess it not really my channel.

Not happy about the changes to the hosts at Dancing with the Stars. Honestly I’m disappointed and will not be watching.

Hell Yes! I can’t wait to see the return of various ABC series. They are winner in my eye.

WHEN AND ON WHAT CHANNEL DOES ‘CALL YOUR MOTHER’ COME ON!!!!

I agree that Call Your Mother I know that will debut on ABC early 2021. I hope and pray that it will be worth the wait.