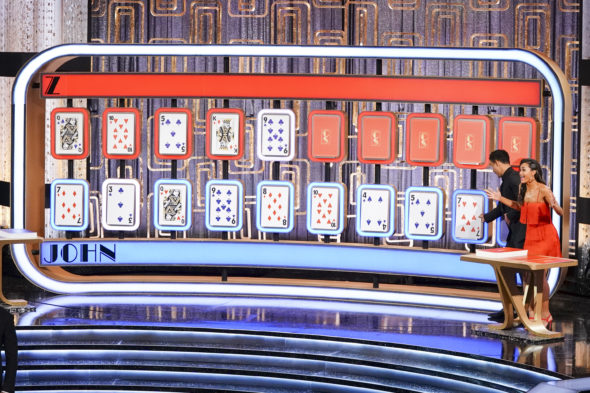 TV show description:
Based on the card game Acey Deucey, the Card Sharks TV show was created by Chester Feldman and debuted on NBC in 1978. After being cancelled in 1981, the game show was revived by CBS from 1986 to 1989. Original episodes and reruns have also run in syndication. Joel McHale hosts this ABC primetime revival.

In the game, two players face-off, each hoping to eliminate the other, with the goal of claiming a $10,000 cash prize and a chance for even bigger winnings. Just one card can cost or gain them a fortune.

The winning contestant bets their prize on properly predicting the final seven cards of the game. The player’s final prize is the amount of money remaining in the bank after all the predictions have been made and the results are revealed.


What do you think? Do you like the Card Sharks TV series? Should this ABC TV show have been cancelled or renewed for a third season?

Card sharks should NOT be canceled

I hope they do not cancel card sharks
I love the show!

Card Sharks is a show I look forward to watching. McHale does a great job hosting too. Please renew the show!

Please, please, please renew Card Sharks. The show is entertaining and McHale as the host is the cherry on top.

Love the old version grew up on it.. This is just as awesome dont cancel love game shows

Please don’t cancel the new card sharks we Love it

Renewed n on every week not when u feel like it