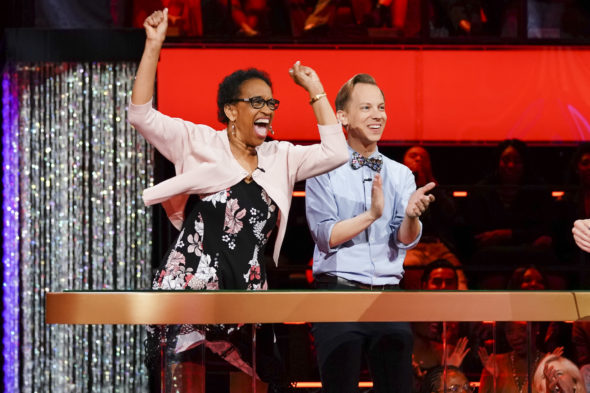 Have viewers been dealt a good deal during the first season of the Card Sharks TV show on ABC? As we all know, the Nielsen ratings typically play a big role in determining whether a TV show like Card Sharks is cancelled or renewed for season two. Unfortunately, most of us do not live in Nielsen households. Because many viewers feel frustration when their viewing habits and opinions aren’t considered, we’d like to offer you the chance to rate all of the Card Sharks season two episodes here. *Status update below.

A ABC game show from executive producers Scott St. John, Jack Martin, and Jennifer Mullin, Card Sharks is hosted by Joel McHale. Based on the card game Acey Deucey, on the series two players face off, each hoping to eliminate the other, with the goal of claiming a $10,000 cash prize and a chance for even bigger winnings. The winning contestant bets their prize on properly predicting the final seven cards of the game. The player’s final prize is the amount of money remaining in the bank after all the predictions have been made and the results are revealed.

What do you think? Which season one episodes of the Card Sharks TV series do you rate as wonderful, terrible, or somewhere between? Should ABC cancel or renew Card Sharks for a second season? Don’t forget to vote, and share your thoughts, below.