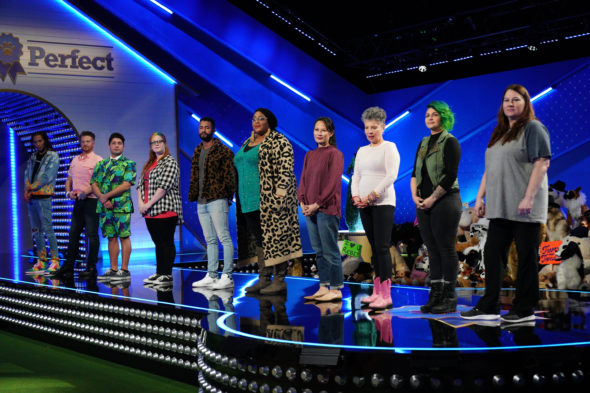 Will this show be sent to the doghouse? Has the Pooch Perfect TV show been cancelled or renewed for a second season on ABC? The television vulture is watching all the latest cancellation and renewal news, so this page is the place to track the status of Pooch Perfect, season two. Bookmark it, or subscribe for the latest updates. Remember, the television vulture is watching your shows. Are you?

Airing on the ABC television network, Pooch Perfect is hosted by Rebel Wilson and judged by Lisa Vanderpump, Jorge Bendersky, and Dr. Callie Harris. This dog grooming competition series features some of the best dog groomers in the country (along with their assistants) competing in a series of themed challenges. In each episode, teams compete and try to earn immunity from elimination. Then, the teams face off with a grooming transformation. The judges are tasked with voting on the incredible creations, naming one team Best in Show, and ultimately forcing another team to go home to the doghouse. Episodes lead up to the season finale where the top three teams compete for a giant cash prize and the coveted “Pooch Perfect” first place trophy.

The first season of Pooch Perfect averaged a 0.43 rating in the 18-49 demographic and 2.58 million viewers. Find out how Pooch Perfect stacks up against other ABC TV shows.

Will ABC cancel or renew Pooch Perfect for season two? The ratings for the UK version weren’t good enough to get it renewed and I’m having doubts about this version’s future too. I’ll update this page with breaking developments. Subscribe for free alerts on Pooch Perfect cancellation or renewal news.

What do you think? Were you hoping that the Pooch Perfect TV show would be renewed for a second season? Are you sorry that ABC cancelled this TV series, instead?

Clearly whoever watched pooch perfect didn’t see how happy those dogs where with all the attention they were getting. Abuse my butt, those of you crying abuse to dogs, have you seen animal abuse??. Phuulease. These dogs are LOVING the attention. They look great and feel great.

Pooch Perfect has been cancelled along with who Wants to be a Millionaire (the Jimmy Kimmel version). They just announced the news yesterday. Kind of sad. Liked both shows.

Would love season 2, obviously the people commenting cruelty are not in the grooming industry of have a clue about “abuse”, LOL maybe get educated??? MAybe for future shows you can teach people what real abuse looks like vs creative grooming. Ffs get a grip and educate yourselves. And maybe find better judges…those guys were more dram queens than judges, and also maybe make the first grooms not creative but breed standard to show off talent of grooming not just the creative side of things. But all in all was fun to watch! Would totally pvr a season 2!!

Hated Pooch Perfect . Hope it is cancelled!!!! Love Rebel Wilson. Ashamed of her.

Didn’t like any of the judges; way to over the top, so very annoying.

Absolutely NOT! Stop this insanity!!!!!!

This is animal abuse. Dogs are not objects!

This show should be cancelled immediately!

This show should be cancelled immediately. This is not respectful or humane to dogs, it’s a disgrace that ABC would even allow this.

Cancel it. It is mean and abusive to dogs!

Cancel it , stupid show , no interest, writers must be desperate !