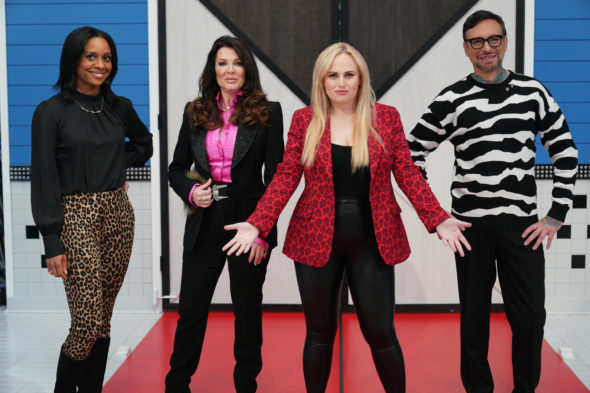 TV show description:
Based on a British game show of the same name, Pooch Perfect is a dog grooming competition series that features some of the best dog groomers in the country (along with their assistants) as they compete in a series of themed challenges.

In each episode, teams of groomers compete in the Immunity Puppertunity challenge, where one team will earn immunity from elimination. Then, in the Ultimutt Challenge showdown, the teams face off with a grooming transformation, which they will show off on the illustrious dogwalk.

The trio of judges is tasked with voting on the incredible creations, naming one team Best in Show, and ultimately forcing another team to go home to the doghouse.

Episodes lead up to the season finale where the top three teams compete for a giant cash prize and the coveted “Pooch Perfect” first place trophy.

Series Finale:
Episode #8 — The Grand Fur-nalé
The season finale of “Pooch Perfect” has arrived and the judges are ready to grant one team the Best in Show title. (TV-PG) The season’s last Puppertunity challenge is Bride & Groomer, where each team must style two dogs for their wedding day. The winner of the challenge will get first choice of dog for the final Ulti-Mutt challenge, which is the freestyle Grand Fur-nalé where stylists must design a dog that represents their grooming team. After showing off their creations on the dogwalk, only one team will be crowned Pooch Perfect and win the $100,000 cash prize.
First aired: May 18, 2021.

What do you think? Do you like the Pooch Perfect TV show? Do you think it should have been cancelled or renewed for a second season?