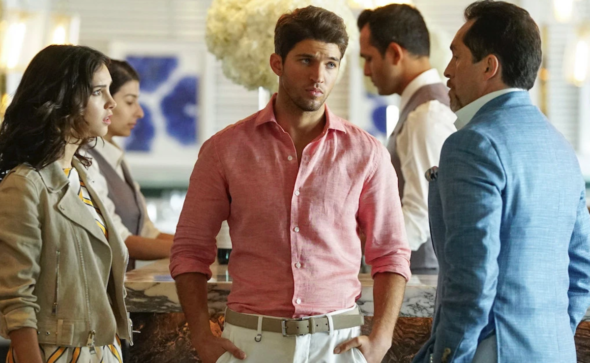 The alphabet network is checking out of Grand Hotel. ABC has cancelled the summer soapy drama series so there won’t be a second season.

The first season of Grand Hotel averaged just a 0.50 rating in the 18-49 demographic and 2.72 million viewers. Of ABC’s 14 summer series, Grand Hotel ranked in 10th place, both in the demo and viewership.

What do you think? Did you like the Grand Hotel TV series? Would you have watched a second season of this ABC TV show?

Soooo sad it was dropped it was sooooogood i kept waiting… then researched i cried! It was actually really entertaining now…. Left just hanging forever its sooo sad and wrong

Loved the show, even my husband loved it. Wish it was not canceled or given a better chance,

That is a really bad shame that they cancelled this show. My wife and I looked forward to each episode, and it was practically the only show we both liked and watched together. Extremely dissappointed!!!!!!

I LOVED GRAND HOTEL! I couldn’t wait to see it every week, and that cliffhanger at the end of the season was phenomenal! I can’t believe it has been cancelled! Please bring it back!

I loved this show, my wife and I finally found a show we could watch together.

I truly loved this program. I could not wait to watch it every week. The actors were very professional, the plot was fenominal, and it kept me wanting more. I am very sad that it was cancelled.
I would love to see a second season and continue the suspense. Please bring it back for all of us interested viewers. We need more shows like this one.

Yes I was looking forward to a season two. You should never leave the audience hanging it should have a happy ending.

My husband and I finally found a show we both loved watching together we loved it ! please bring it back for another season !!

Yes I would have watched season 2. That was one of the best shows on this summer. Well only ABC would cancel a great show.

Yes, my wife and I watched season one of Grand Hotel streaming on Hulu. Actually, we started watching today and now that is 3:00 a.m. we are going to bed leaving only 2 episodes to view! We loved watching the show because of all the twists and turns allowing us the rare opportunity to be entertained without having figured out what happens next from one episode to the next! It is impossible to anticipate accurately what happens next. Now, that to is is entertainment. The characters are well developed and they tend to draw one in to each episode almost… Read more »

Please bring back Grand Hotel for a 2nd Season, one of the few weekly shows I actually watched and looked forward to!

Please bring a Second Season, one of the few shows that I actually watched and really enjoyed!!