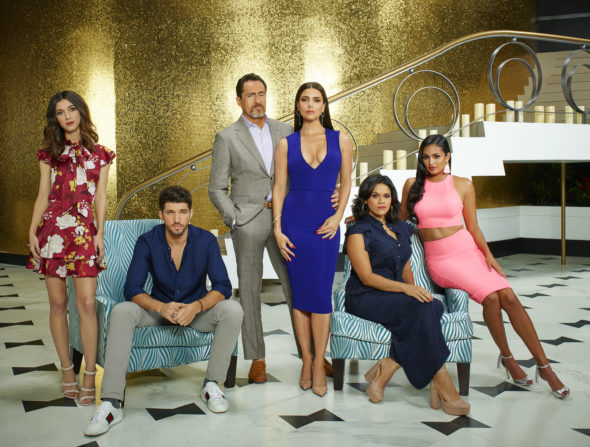 The hotel is a second home to its exclusive clientele, who revel in excess. Beneath the veneer of luxury, lurk sinful scandals, financial foibles, and deep, dark secrets.


What do you think? Do you like the Grand Hotel TV series? Should this ABC TV show have been cancelled or renewed for a second season?

If I could wave a magic wand to bring it back I’d be waving it all day and night. Shame it ended

The first season was so good, idk how it got an average of 0.5 ratings such a disappointing from a series that I though was really good and enjoyed but won’t be able to see season 2.

PLEASE bring Grand Hotel back! It was such a good show and I enjoyed it and have been waiting for it to return. We have been left hanging! There are so many bad tv shows and a good one like Grand Hotel needs to come back – it was one of the best ones!

So disappointed that this show was cancelled!

So disappointed that this show was cancelled! We’ve been patiently awaiting its return. Everyone I talked to loved it…makes me curious how they made this decision. ‍♀️

I really liked this show and was waiting for its return. I know lots of people that watched and will be disappointment hearing this. Please find a way to bring it back .

Like Fresh Off the Boat, Grand Hotel finally represents a VERY UNREPRESENTED demographic on network TV. But forget that, it was a good show with good writing, a good story and wonderful sets. There are some really silly shows being aired. Why can’t ABC find a time for GH? It left me hanging! There is some stuff I want to know!

I’ve been patiently waiting for this to come back. Why would you cancel such a fun and exciting show. I wonder if the heads of the networks know what we really watch!?

Best show ever! Sad that it was cancelled!!

This is one of the best shows on tv! I am so upset! I’ve been anxiously waiting to hear when it was going to come back on! Why do all the great drama series get cancelled when dumb comedies always seem to make it? Think they are making a big mistake cancelling this show.

My husband and I are so upset thus was one of our favorite new series on TV and we were so looking forward to the new season !!! The acting was Amazing along With the story lines and the cast was perfect. How come all the good shows get cancelled boohoo.

I am so disappointed this is my favorite new show in 2019 and I was looking forward to more. ABC made a big mistake by cancelling it.

I am so disappointed that this show was cancelled. It had an excellent cast, excellent storyline; a show that held a person’s interest. Too bad ABC decided to cancel it.

Grand Hotel was an awesome show. I am devastated that ABC cancelled after only 1 season. I dont think it was promoted enough. Everyone i told about it had never heard of it!
Bring it back and i will promote it on Facebook