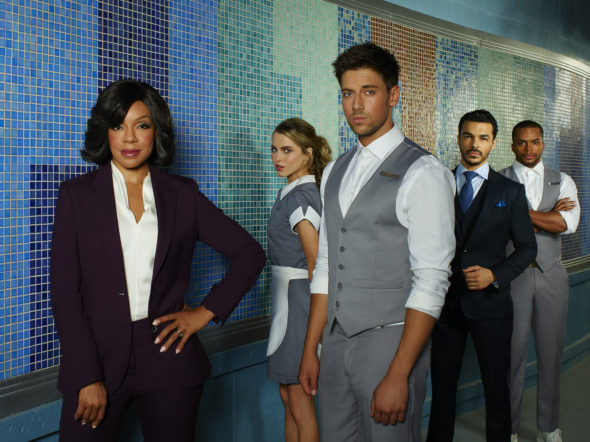 Is the network booking a return trip? Has the Grand Hotel TV show been cancelled or renewed for a second season on ABC? The television vulture is watching all the latest cancellation and renewal news, so this page is the place to track the status of Grand Hotel, season one. Bookmark it, or subscribe for the latest updates. Remember, the television vulture is watching your shows. Are you?

The first season of Grand Hotel averaged a 0.50 rating in the 18-49 demographic and 2.72 million viewers. Find out how Grand Hotel stacks up against other ABC TV shows.

Will ABC cancel or renew Grand Hotel for season two? The ratings have been really low, right from the start, but it may still end up landing a renewal. I’ll update this page with breaking developments. Subscribe for free alerts on Grand Hotel cancellation or renewal news.

What do you think? Were you hoping that the Grand Hotel TV show would be renewed for a second season? Are you sorry that ABC cancelled this TV series, instead?

it sucks they left you on a clif hanger

Why was it cancelled. Grand hotel was cool

ABC does this a lot, doesn’t give a show a chance. Then keeps other shows too long. I was Not promoted !

Please help…we need it to be renewed. I just loved how the series had alot of drama

Really enjoyed the show , we deserve a 2nd season !!

My husband and I really loved Grand Hotel and was looking forward to the next season!
Always mystery and excitement in the hotel and restaurant business!

I love Grand Hotel!!!!! I really hope it don’t get canceled!!!!! I have been waiting for it to come back on!

I truly enjoyed watching this Latin inspired drama filled series. It was fun to watch. It’s too bad y’all decided not to take a shot at its renewal of bringing it back to us viewers.

I’m soo sad Grand Hotel has been cancelled I just binged season 1 and googled season 2. I’m praying it will b picked up again by abc or another network. PLEASE PLEASE bring it back!!

Nooooo! Loved it – looked forward to it every Monday – so dishy! Every show had a great party scene, fab clothes and good humour. Mistake to cancel! Eva Longoria kudos to you – nailed it!

Very disappointed… loved and looked forward to watching the show every week.