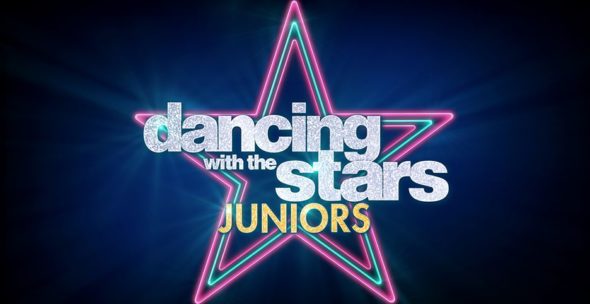 TV show description:
Like the parent-series, the Dancing with the Stars: Juniors TV show is a reality TV series dancing competition, in which celebrities and their professional ballroom dancer partners compete for the coveted Mirrorball trophy. In Dancing with the Stars: Juniors, of course, the celebrities are kids, as are their partners — professional junior ballroom dancers.

The teams learn choreographed routines, including the Cha Cha, Salsa, Foxtrot, and Jive, under the mentorship of Dancing with the Stars pros. Choreographer Mandy Moore, professional dancer Val Chmerkovskiy, and Dancing with the Stars: Athletes champion Adam Rippon judge their performances. The judges votes are combined with those of the studio audience to determine who will move on to the next episode and who will be eliminated.

Series Finale:
Episode #9 — The Finale (Holiday Special)
The night kicks off with all 12 Juniors kid couples, their mentors, judges Mandy Moore, Val Chmerkovskiy and Adam Rippon, and hosts Jordan Fischer and Frankie Muniz dancing to Whitney Myer’s “Dancing in the Stars.” For their first dance, the four finalist couples will each reprise a favorite dance they performed during the season, which will also feature their mentor. Each couple will perform a jazz, cha cha or salsa. For their second dance, each couple will perform a no-holds-barred freestyle to a special holiday-themed song. At the end of the night, based on the studio audience vote combined with the judges’ scores, one couple is crowned the champion and take home the all-new Juniors Mirrorball trophy.
First aired: December 9, 2018.

What do you think? Do you like the Dancing with the Stars: Juniors TV series? Should this ABC TV show have been cancelled or renewed for a second season?

I want this show back, and I want it back for good, this time with Disney+.

I love DWTS Juniors! Why booted it. If you going booted it then boot DWTS too. So please bring it back. Love watching the kids it was fun & enjoyable

I’m so sad. I’ve been waiting for the second season and now it’s not even existing.

I really liked DWTS Juniors! Its always the good stuff that gets booted…why??!!!…

Maybe the network gets tired of it and wants to focus on the regular series. That’s my best guess. Hopefully ABC will change their minds about the fate of Dancing Juniors in 2020 or later, but only time will tell for that time.

It’s never bored. They are so cute kids. We have been waiting on new series for DWTS Juniors. Please. Get them back on it would be new experience for kids. So they can enjoy the dancing from go to bad places or to learn bad things no way!!! So PLEASE. Let the kids experience and enjoying!!!

Like I said, it’s up to ABC to decide. Remember when Fox made the 2016 edition of American Idol the “farewell” season? Then all of a sudden, ABC won the rights to a reboot.