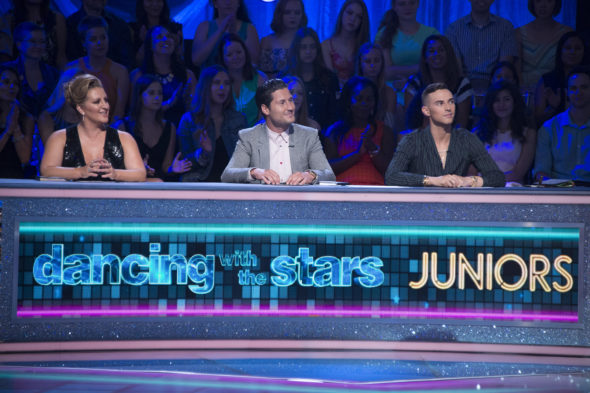 Are the kids still keeping time to the beat? Has the Dancing with the Stars: Juniors TV show been cancelled or renewed for a second season on ABC? The television vulture is watching all the latest cancellation and renewal news, so this page is the place to track the status of Dancing with the Stars: Juniors, season two. Bookmark it, or subscribe for the latest updates. Remember, the television vulture is watching your shows. Are you?

Update: ABC has cancelled Dancing with the Stars: Juniors so there won’t be a second season.

What do you think? Were you hoping that the Dancing with the Stars: Juniors TV show would be renewed for a second season? Are you sorry that ABC cancelled this TV series, instead?

This show was very much enjoyed by my family.

I am so upset that Dancing with the Star Jr. has been cancelled. I have 2 granddaughters who enjoyed watching this show with me. The young adults of this world is our future and this was one of the very few shows that proved that. Shame on you for cancelling!!

This show needs to be renewed, ABC Network please give this show and 2nd chance. We all love this amazing show.

Better ratings than 20/20. I enjoyed the Juniors every bit as much as the regular show maybe more. No reason to cancel this except maybe some twitter complaints – just nonsense.

That’s up to ABC to decide. 🙂 Hopefully the network changes their minds about Juniors’ fate in 2020, but only time will tell for that one. 🙂

I loved it. Please bring it back

In Germany a version from DWTS Jr. doesn’t works, because of the law. Children don’t be allowed to train so many hours a week – it’s like working. Even if they have fun with this…
My wife and me were watching DWTS Jr. at youtube. It was amazing.
We both wish a second Season!!!

That would be great!

Yes they should continue the show dancing with the stars juniors. They were cute and it’s the cleanest. Show on tv

This show is amazing! I hope there is going to be more season.

The show idea itself was OK, but not appropriate for kids at all. One of the judges is obviously suffering from a mental disorder and has no business being around children.

I completely disagree. The show was amazing and totally appropriate for all ages. BEST show ever. You should take your opinions elsewhere.