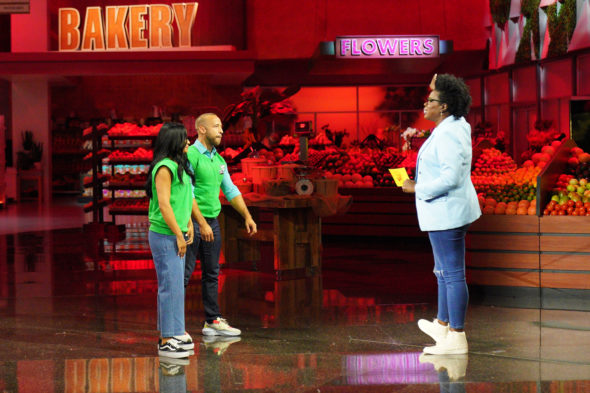 An ABC game show, Supermarket Sweep is hosted by comedienne Leslie Jones and is the latest iteration of the series that debuted in 1965. A fast-paced competition, the show follows teams of two friends or relations. Clad in iconic colorful sweatshirts, the teams compete against one another in back-to-back games using their grocery shopping skills and knowledge of food store merchandise. Teams compete for the chance to play in the “Super Sweep,” a race against the clock to find five products in order to win a big cash prize.

What do you think? Which season two episodes of the Supermarket Sweep TV series do you rate as wonderful, terrible, or somewhere between? Do you think that Supermarket Sweep should be cancelled or renewed for a third season on ABC? Don’t forget to vote, and share your thoughts, below.

I absolutely love the show. Leslie Jones and her “helpers” are sooooo funny. When I view reruns of the original version with host Dave R….., it’s just not as funny. I hope Leslie Jones and the show will return soon. Sunday night tv just isn’t the same.

I love the old and the new SUPERMARKET SWEEP!! KEEP IT ON PLEASEEEEEEE!

Keep the show going! It’s clean and silly fun. Contestants really work or hustle for the win. Leslie is a great in this role.

All of the season is good so far , I don’t understand why the contestants don’t know how to make the best of their time, they ride around with empty carts, but it’s a good funny show

It just started up here, I watched the first one ! This show is silly enough that it makes me laugh. Some of the contestants are not very smart , your cart should NEVER be empty !!!!

I think the show is awesome this is one of my favorite game shows I use to watch it back in the days I’m glad is back Lesley is awesome GOD blessed her.