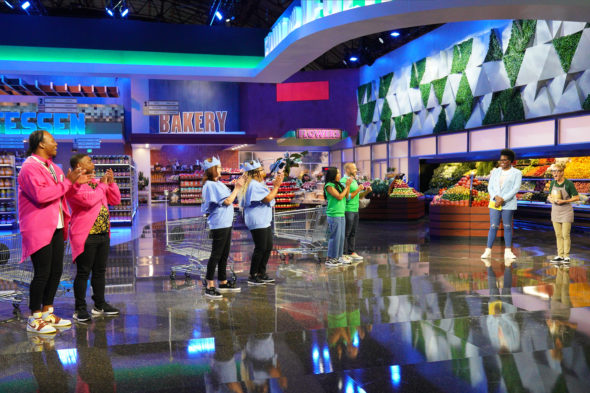 Is it time for this revival to check out? Has the Supermarket Sweep TV show been cancelled or renewed for a third season on ABC? The television vulture is watching all the latest cancellation and renewal news, so this page is the place to track the status of Supermarket Sweep, season three. Bookmark it, or subscribe for the latest updates. Remember, the television vulture is watching your shows. Are you?

Airing on the ABC television network, Supermarket Sweep is hosted by comedienne Leslie Jones and is the latest iteration of the series that debuted in 1965. A fast-paced competition, the show follows teams of two friends or relations. Clad in iconic colorful sweatshirts, the teams compete against one another in back-to-back games using their grocery shopping skills and knowledge of food store merchandise. Teams compete for the chance to play in the “Super Sweep,” a race against the clock to find five products in order to win a big cash prize.

The second season of Supermarket Sweep averaged a 0.39 rating in the 18-49 demographic and 2.32 million viewers in the live+same day ratings (includes all DVR playback through 3:00 AM). Compared to season one, that’s down by 45% in the demo and down by 27% in viewership in the live+same day ratings (including DVR playback through 3:00 AM). While these numbers don’t include further delayed or streaming viewing, they are a very good indicator of how a show is performing, especially when compared to others on the same channel. Though other economic factors are involved, the higher-rated shows usually get renewed and the lower-rated ones get cancelled. Find out how Supermarket Sweep stacks up against other ABC TV shows.

Will ABC cancel or renew Supermarket Sweep for season three? This show was a moderate success in its first season and is based on a beloved format. The network’s revived lots of other game shows over the past several years but seems likely to start retiring some of them. Despite a sizable decline in the ratings, I think Supermarket Sweep still has a chance of being renewed, possibly for a summer run. I’ll update this page with breaking developments. Subscribe for free alerts on Supermarket Sweep cancellation or renewal news.

What do you think? Do you hope that the Supermarket Sweep TV show will be renewed for a third season? How would you feel if ABC cancelled this TV series, instead?

Pretty PLEASE renew Supermarket Sweep! I love Leslie Jones as the host. The show is super fun to watch and Leslie is hilarious!

Hi I really, really really and a whole lot of reallys miss super market sweep that was a very very fun & clean show that I could watch & l miss Leslie Jones. Please , please bring it back and renew their saeson.
Love Ms. Joyce Pierce

Please bring supermarket sweep back I miss it

Supermarket Sweep Season 3 will not be cancelled. It must go on!!!!!!!

I truly hope and pray that ABC Keeps supermarket sweep on air. I watched every episode. Leslie Jones Neil and Bethal are hilarious. I would love to see more seasons and episodes of this show.

I think supermarket Sweep should be back a 3 and 4 season also should be nominated for a Primetime Emmy and NAACP Image Award for Outstanding Game Show and TV Competition Host because it’s funny, knowledgeable, and skills to do, plus add two new supermarket workers make Rich the new security guard same rules