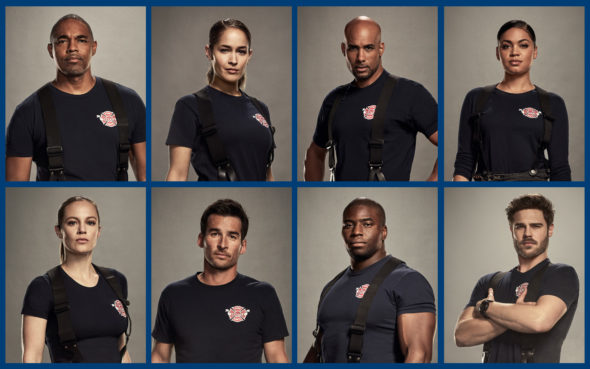 Will this series stay hot?  Has the Station 19 TV show been cancelled or renewed for a fifth season on ABC? The television vulture is watching all the latest cancellation and renewal news, so this page is the place to track the status of Station 19, season five. Bookmark it, or subscribe for the latest updates. Remember, the television vulture is watching your shows. Are you?

Airing on the ABC television network, Station 19 stars Jaina Lee Ortiz, Jason George, Boris Kodjoe, Grey Damon, Barrett Doss, Jay Hayden, Okieriete Onaodowan, Danielle Savre, and Stefania Spampinato. The TV series centers on the heroic firefighters at Seattle Fire Station 19. From the captain to the newest recruit, they risk their lives and hearts both in the line of duty and off the clock. The brave men and women are like family and together, they put their own lives in jeopardy as first responders to save the lives of others.

The fourth season of Station 19 averaged a 0.83 rating in the 18-49 demographic and 5.18 million viewers. Compared to season three, that’s down by 21% in the demo and down by 20% in viewership. Find out how Station 19 stacks up against other ABC TV shows.

Will ABC cancel or renew Station 19 for season five? This series was ABC’s second-highest-rated drama series for the 2019-20 season, only behind sister series Grey’s Anatomy. I have no doubt that it will be renewed. I’ll update this page with breaking developments. Subscribe for free alerts on Station 19 cancellation or renewal news.

What do you think? Are you glad that the Station 19 TV show has been renewed for a fifth season? How would you feel if ABC had cancelled this TV series, instead?

I will no longer watch this trash

hello! my mother and me are so happy! our wishes to come true! we send congratulations for our adorables formidables heroes!and briloliant continuation

I love Station 19 they have so many storylines left to tell. I would be so disappointed, and mad if they cancelled the series before we got to see the full potential of the show. In my opinion it could go on for several more seasons and still be very entertaining.

Forget the firefighters having so much sex.

I love this show and am excited for season 5. I would be heartbroken if not renewed.

good morning from FRANCE!i pray so strong that station 19 is renewed for season 5!good luck for all my marvellous and formidables friends!i cross the fingers!!

I am upset there is not another season of this show, I just got done watching last one an man i want to see more, an its not fair, it keep me and my son calm by watching tv shows like this one, please get this show back on i know the covid had part of this but alot of us are sitting at home an love the show an now when we want to watch more, of it ther isnt any more, its very disappointing, i want station 19 back on i say.. thank you and be safe out… Read more »

Why is it that abc cancelled station 19 and all the good shows but expects people to stay loyal to this crap station. I will not be watching abc ever again

I want station 19 to see season 5 soon for renewed

I sure hope it gets renewed for a few more seasons