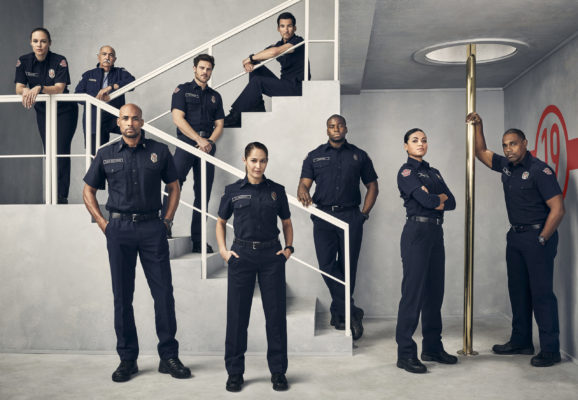 It’s a good day for the men and women of Seattle Fire Station 19. ABC has issued an early fourth season renewal for the Station 19 TV show. The third season of the dramatic series currently airs on Thursday nights and averages a 1.02 rating in the 18-49 demographic with 6.27 million viewers. Compared to the second season, that’s up by 7.5% in the demo and up by 18.6% in viewers.

‘STATION 19’ RENEWED FOR FOURTH SEASON
Current Season Is Most-Watched Ever Show Ranks as the No. 1 Program in Thursday’s 8 p.m. Hour in Total Viewers and Adults 18-49
New Episode Airs Thursday, March 12, at 8|7c on ABC

Editor’s note: The season 17 pickup of “Grey’s Anatomy” was previously announced in May 2019.

“Krista Vernoff is a sharp, superb storyteller and we’re so grateful to her – along with the talented cast and crew – for all they’ve done to make ‘Station 19’ thrive this season,” said Karey Burke, president, ABC Entertainment. “This addictive, rich show is hitting series highs this year for a reason, and we can’t wait to deliver more great stories to our passionate audience.”

Ranking as the No. 1 program in Thursday’s 8:00 p.m. hour this season in Total Viewers and Adults 18-49, ABC’s “Station 19” is growing its overall audience over its prior season (+9%) to deliver its most-watched season ever. In addition, after 35 days of delayed viewing on linear and digital platforms, “Station 19” averages 13.5 million Total Viewers and a 3.71 rating in Adults 18-49 this season.

“Station 19” follows a group of heroic Seattle firefighters as they put their lives and hearts on the line. The latest series from Shondaland and the executive producers of “Grey’s Anatomy,” “Scandal” and “How to Get Away with Murder” takes us inside the tough, tight-knit and sometimes heartbreaking world of the city’s bravest first responders.

In “Born to Run,” this Thursday’s all-new episode airing at 8:00-9:00 p.m. EDT, the Station 19 crew responds to a drunk driver scene. Meanwhile, Dean receives advice from Pruitt on a difficult situation, and Sullivan seeks help from Dr. Amelia Shepherd. Episodes can also be viewed the next day on demand and on Hulu.

What do you think? Do you enjoy the Station 19 TV show? Are you glad that it’s been renewed for a fourth season on ABC?

I absolutely love this show, keep Andy and Sullivan together.

really liked the show when i first started watching this year lately too many sick alphabet scenes won’t watch anymore! way to much of this crap on tv anymore.

I love this show and the cast! I like the crossover shows, too! I don’t want to see this show canceled!

No I stopped watching Station 19 at the beginning of
This season. The acting is really pretty bad from the lead female (she acts like a spoiled child). Also the
African American female firefighter acts like she is
10 years old. I personally would appreciate watching
Firefighters more authentic believable storyline. Example: Chicago Fire The numbers given to validate renewal did not appear to be very impressive.
Shonda you can do much better than this lackluster
Show. Station 19 needs to go!

I’m really glad there’s going to be a season 4, but unless I missed something in the article, I didn’t see a start date for season 4.

I’m really enjoying it and am happy there will be a 4th season.

I love the story between Andy and Sullivan. Please keep them together.