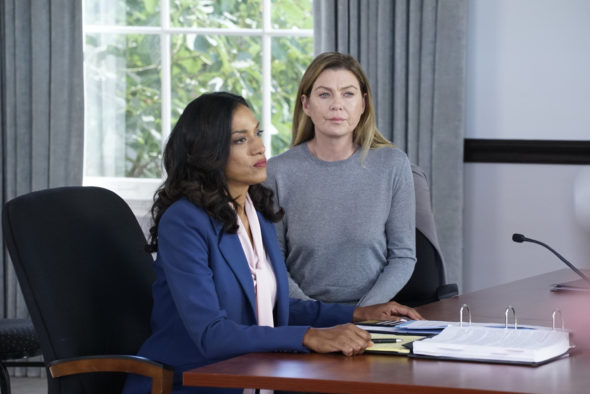 Grey’s Anatomy fans may get some closure after all. TVLine reports there are hints of the ABC TV show’s unfilmed season 16 finale in the upcoming season three finale of Station 19.

Because of the ongoing cornavirus pandemic, Grey’s Anatomy shut down production before they could finish filming season 16. However, showrunner Krista Vernoff says not all is lost. Speaking to TVLine, she suggested there are hints of the ABC series’ finale in the final two episodes of Station 19‘s third season:

Ironically, when fans watch Episode 15 and 16 of Station 19, they will probably have a feeling of some of what we had planned for [the original Grey’s finale].”

ABC has not yet announced an airdate for the season three finale of Station 19, but it will likely air in May. Grey’s Anatomy has already been renewed for a 17th season.

What do you think? Do you watch Grey’s Anatomy? Were you happy with the season 16 finale?

I don’t watch station 19 so I’m not sure what the hints of the season finale was for greys but what I do know is I don’t like how they ended up cancelling teddy and Owens wedding. I agree he should have cancelled it but I think he should have gone and talked to her about it instead of saying he had surgery. And teddy should have been honest up front and maybe there would have still been a wedding because maybe they could have saved it. I think the final episodes of this season that got cut short should… Read more »

I am a long time fan of Grey’s since the fist show, and love the characters. The only thing I really was upset about is when they killed off Derek. He and Meredith had a fairy tale life together like everyone wants to have, but I eventually got over it. Station 19 is a great show too with their characters portraying a family like atmosphere. I love the crossovers with Grey’s characters that makes me feel like it’s old home week! Keep these shows coming!

i loved station 19 just like i love greys. I am glad Richard will be staying
and wasn’t killed off.

Loved it. So glad Richard wasn’t killed off.
For Everyone who complains about station 19 cross overs, i think they are a breath of fresh air. Just because you dont watch station 19 doesnt mean you won’t know what’s going on with greys..
I have never missed an episode of greys since it aired in march 2005.. and hope to watch for many more years….

The finale for Greys was pretty great, but I think the last few episodes that were supposed to be the finale should start in season 17. Also I hope that get picked up for season 18. I also love station 19th!

Why?? Why do this? I don’t watch Station 19 and I’m annoyed that they keep trying to make us watch it because of Grey’s.