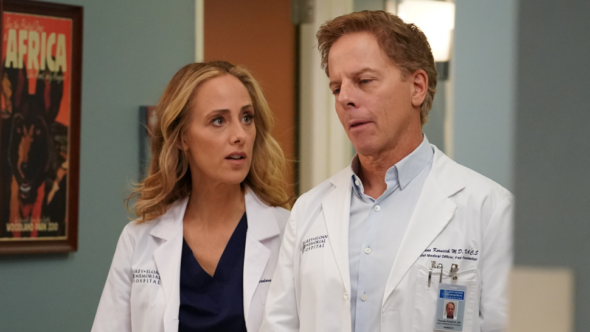 What new emergencies will appear in the 17th season of the Grey’s Anatomy TV show on ABC? As we all know, the Nielsen ratings typically play a big role in determining whether a TV show like Grey’s Anatomy is cancelled or renewed for season 18. Unfortunately, most of us do not live in Nielsen households. Because many viewers feel frustration when their viewing habits and opinions aren’t considered, we invite you to rate all of the 17th season episodes of Grey’s Anatomy here. *Status update below.

An ABC medical drama, Grey’s Anatomy stars Ellen Pompeo, Chandra Wilson, James Pickens Jr., Kevin McKidd, Kim Raver, Jesse Williams, Camilla Luddington, Caterina Scorsone, Kelly McCreary, Giacomo Gianniotti, Chris Carmack, Jake Borelli, Greg Germann, Richard Flood, and Anthony Hill. The long-running series revolves around the personal and professional lives of the surgical residents, fellows, and attendings in the surgical wing of the fictional Grey-Sloan Memorial Hospital in Seattle, Washington. They seek comfort from one another, and, at times, more than just friendship. Together they discover that neither medicine nor relationships can be defined in black and white.

What do you think? Which season 17 episodes of the Grey’s Anatomy TV series do you rate as wonderful, terrible, or somewhere between? Do you think that Grey’s Anatomy should be cancelled or renewed for an 18th season on ABC? Don’t forget to vote, and share your thoughts, below.

I have watched since the beginning…after the episode of the white cop pulling over the black doctor…not showing but implying what was implied…took it off my DDR and will never watch again. Shame on Greys Anatomy making it about politics. So disgusted…that’s why your ratings have dropped…people are fed up with Hollywood and their crap. Took a great show and destroyed it. Thanks a lot. Hope they cancel it.

I have liked this series until the last season. I thought she was on the beach for too many episodes. The writing has not been that good this year. I though the April and Jackson episode was the best. Sometimes a show has played out. I hear there will be a next season so I hope the writing improves over season17.

Please do not cancel Grey’s Anatomy. Been watching since day one. This show is on my favorite list.

Grey’s Anatomy has to stay. Thursday’s are my favorite night for watching TV.

I still love this show even when the writing has gone down like how Alex left the show it should have gone like this he should have called mer, webber and the nazi, but he should have broke jo’s heart in person because izzy had one child a boy from the eggs they saved to make it his one last chance to be a parent that makes it his last chance for happiness. But this season please put teddy and yang’s ex out of there misery kill them off or married and happy ever after and poor thing Dr webber… Read more »

I always look forward to watch the program I love this show..

Been watching for soooo long , but like other shows , don’t turn it on to a total soap !!!

I absolutely love this show and I have watched every single episode since the show started. It is my favorite show and always tape it if I can’t watch
when it is in each week. I love the actors/actresses,
and the story lines. It is always always top notch!

Although I have not liked the last few seasons, Mainly because of alot of the newer characters. I do love how the season opener ended, with Meredith seeing Derek. It was quite a shocker, but in s good way. I will continue watching it if it gets renewed.

I truly enjoy the first episode of Grey’s Anatomy and I still believe that ABC will renewal the show for the 18th season.

This depends on how much ABC offers Ellen Pompeo to stay for one more season as Shonda Rhimes the creator has already said when Ellen leaves the show comes to an and and has left the decision to her friend Ellen Pompeo. Now that’s friendship for you. I can see ABC offering Ellen Pomeo a million to do season 18 as they do not want to lose their Flagship show which is still No 1 in the ratings after 16 years which is amazing.

This show is getting to be really boring and I’m losing a lot of interest in even watching it.

Kathy, For you, it might be time to shut it off & no longer watch it. Do know there are many who still really appreciate it still and hope people continue to discover it. Be well.

Your right , this show sucks. So does Ellen pompeo if they killed her off it might be worth watching

Shonda Rhimes the creator of Grey’s Anatomy has already said during interviews the she made a pact with her friend Ellen Pompeo which is huge. When Ellen Pompeo wants to leave GA then the show will come to an end. The network is still negotioning with Ellen Pompeo on how much money she will accept for one more season but Ellen has not made a decision yet. I can honestly see ABC offering Ellen 1 million to do one more season as they don’t want to lose their Flagship show which is still No 1 in the ratings afttr 16… Read more »