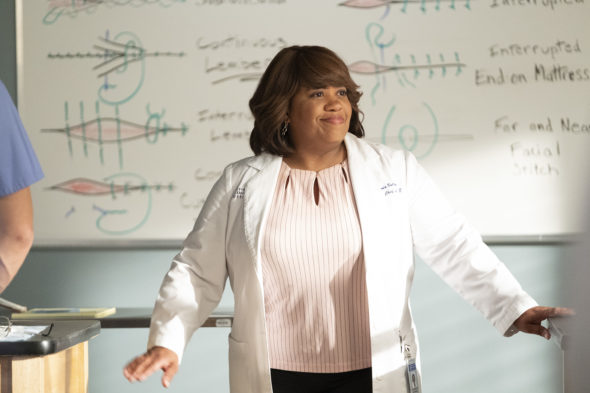 How long will Grey-Sloan stay open for business? Has the Grey’s Anatomy TV show been cancelled or renewed for a 17th season on ABC? The television vulture is watching all the latest cancellation and renewal news, so this page is the place to track the status of Grey’s Anatomy, season 17. Bookmark it, or subscribe for the latest updates. Remember, the television vulture is watching your shows. Are you?

The 16th season of Grey’s Anatomy averaged a 1.28 rating in the 18-49 demographic and 6.23 million viewers. Compared to season 15, that’s down by 18% and down by 8%, respectively. Find out how Grey’s Anatomy stacks up against other ABC TV shows.

Will ABC cancel or renew Grey’s Anatomy for season 17? The network has already renewed Grey’s so viewers can sit back, relax, and enjoy the drama. I’ll still keep an eye on the ratings though and update this page with breaking developments. Subscribe for free alerts on Grey’s Anatomy cancellation or renewal news.

What do you think? Are you glad that the Grey’s Anatomy TV show has been renewed for a 17th season? How would you feel if ABC had cancelled this TV series, instead?

Grey’s Anatomy is absolutely one of my favorites. It is the best show on evening TV. Much like General Hospital, it is one of the few network shows I still watch and will continue to watch.

hello! i am so happy that greys anatomy is renewed for season 17th!its a wonderful news!im so happy for all my beautiful friends!happy so long success!so happy for to see in FRANCE, unfortunately i cant to watch all complete s 16th, because french channel are stopping the episodes s 16th after episode 11th.i hope that its only temporarely!cant wait for to see dvd and to buy dvd s 15th 16th and 17th.stay safe and be careful!big kisses from France

Karev and Webber were the only two genuinely interesting characters left for me. The series has, to my mind, devolved into little more than a left-wing soap-opera with some very thin story lines and woeful writing. Episode 16 was a reminder of why I enjoyed the show and what has been lost. So with Karev gone and Webber seemingly ready to either deep dive back into another dark funk or move on too, there isn’t a single character left that I care enough about to continue watching. This last Episode was satisfying enough to serve as my finale.