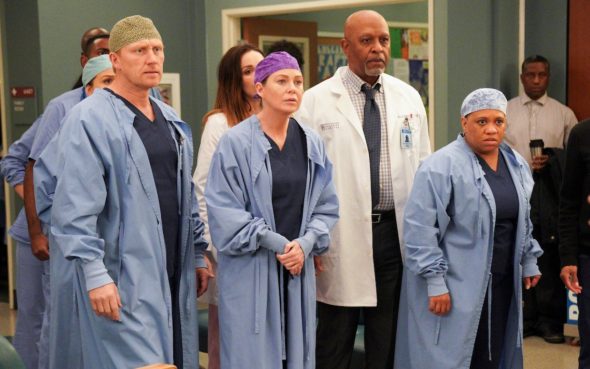 How long will Grey-Sloan Memorial Hospital stay open? Has the Grey’s Anatomy TV show been cancelled or renewed for an 18th season on ABC? The television vulture is watching all the latest cancellation and renewal news, so this page is the place to track the status of Grey’s Anatomy, season 18. Bookmark it, or subscribe for the latest updates. Remember, the television vulture is watching your shows. Are you?

Airing on the ABC television network, Grey’s Anatomy stars Ellen Pompeo, Chandra Wilson, James Pickens Jr., Kevin McKidd, Kim Raver, Jesse Williams, Camilla Luddington, Caterina Scorsone, Kelly McCreary, Giacomo Gianniotti, Chris Carmack, Jake Borelli, Greg Germann, Richard Flood, and Anthony Hill. The long-running series revolves around the personal and professional lives of the surgical residents, fellows, and attendings in the surgical wing of the fictional Grey-Sloan Memorial Hospital in Seattle, Washington. They seek comfort from one another, and, at times, more than just friendship. Together they discover that neither medicine nor relationships can be defined in black and white.

The 17th season of Grey’s Anatomy averaged a 1.02 rating in the 18-49 demographic and 5.17 million viewers. Compared to season 16, that’s down by 20% in the demo and down by 17% in viewership. Find out how Grey’s Anatomy stacks up against other ABC TV shows.

Will ABC cancel or renew Grey’s Anatomy for season 18? There’s been talk of this show possibly ending this year but I have a hard time believing that the network will let its highest-rated drama series go. I’m sure it will be renewed. I’ll update this page with breaking developments. Subscribe for free alerts on Grey’s Anatomy cancellation or renewal news.

What do you think? Are you glad that the Grey’s Anatomy TV show has been renewed for an 18th season? How would you feel if ABC had cancelled this TV series, instead?

So happy for renew Grey’s Anatomy, o can’t wait till october to see season 18 and Meredith Grey back.

When considering ratings, you have to consider that broadcast television has been losing viewership to cable television annually.
I think there should be a season 18 as this season has been including life with COVID (actually very well). I’d also hope that Netflix would pick up the series if ABC cancels it – their 10 episode format is optimal storytelling.