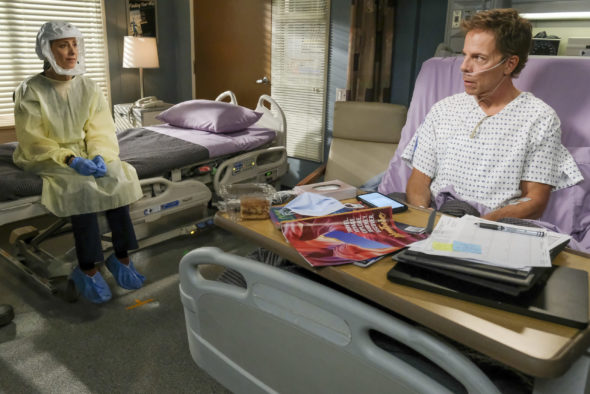 Grey’s Anatomy is returning from its hiatus tonight, and this could be the beginning of the end for the ABC drama. Talks for season 18 are currently taking place, but the cast and showrunner of the series are prepared for the series to end.

Showrunner Krista Vernoff said the following about the ABC drama’s future, per The Hollywood Reporter:

“I’m planning a season and a finale that could function as either a season finale or a series finale. I’m planning for both contingencies and it’s hard and it’s not ideal. It’s not where I wish we were. I’ve told them that I have to know before I’m making the finale what we’re making. Because there are a couple of character threads that will change. I’ve got plans for both contingencies. Either there will be closure or I will build something in that allows me to have a bit of a cliffhanger and a thread for next season.”

Station 19, a sister series to Grey’s Anatomy, is still up for renewal as well. Could fans see another spin-off in the future? Vernoff said the following about that possibility:

“It’s been so complicated and so difficult to come back to production during the pandemic. We are on fumes. I don’t really have creative space for imaginings of what might happen next year; I’m trying to get through this season. Once I know if this is the final season or not, I can start to try to imagine other things. But trying to simultaneously plan for the end of the series and the end of the season — if it’s not the end of the series — it’s like breaking two shows. That’s what I’ve got bandwidth for. That, Station 19 and Rebel. That’s enough.”

Viewers will need to wait to find out if this is the last season of Grey’s Anatomy. The series is still a big hit for the network, and Station 19 has helped breathe new life into the medical drama.

What do you think? Is it time for Grey’s Anatomy to end on ABC? Do you want an 18th season?

Please continue both series. I have watched GA from the beginning and would hate to see it go. Same with Station 19

It is my favorite series on TV. I prefer the cliffhanger.

I think they should continue on with the next season of Grey’s Anatomy. There are many things to complete the characters stories. Many undecided futures and twists of plot that can be made with this story.

Hmm well, I have been watching since the beginning, but more and more now the material is not what it use to be. Maybe time to end it , rather than drag it out with nonsense.

Please keep Grey’s Anatomy . I love this show and Station 19 is also an awesome show .

When it first came on and took the place of Boston Legal I was really pissed but I have grown attached to Grey’s Anatomy and love it. I hope they keep it running for years to come; same thing goes for Station 19.

I LOVE Grey’s Anatomy! I really hope this isn’t the end! Even in this pandemic it still.can show us there is still help and remind us of those that are there fo help whether it’s a pandemic or just a regular health problem. Not to mention it reminds us that there are still ppl out there to help us in these hospitals that actually care! But mostly it helps take out minds off if all the things around us when y’all show us these love and caring scenes between husbands and wives and siblings to also parents. SO NOT READY… Read more »

I loved the show for all the previous seasons. I didn’t like the ocean scenes. Let Grey finally get happy with a great guy and leave town. It’s time to close the doors

Absolutely not. Continue the show! It is beloved

Absolutely not. Continue the show! It is beloved