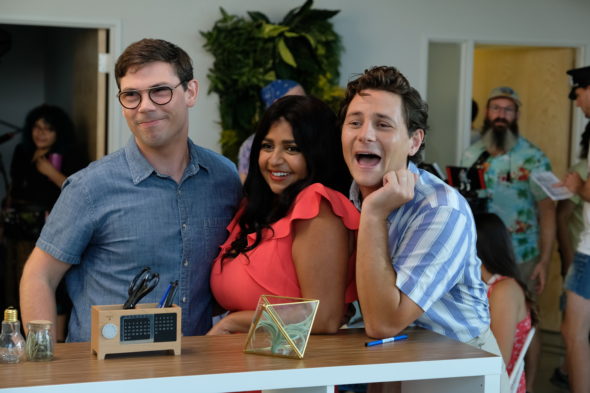 What’s in store for Ryan Kayes? Has the Special TV show been cancelled or renewed for a second season on Netflix? The television vulture is watching all the latest TV cancellation and renewal news, so this page is the place to track the status of Special, season two. Bookmark it, or subscribe for the latest updates. Remember, the television vulture is watching your shows. Are you?

A Netflix short-form scripted comedy, Special stars Ryan O’Connell, Jessica Hecht, Punam Patel, Marla Mindelle, Augustus Prew, and Patrick Fabian. In addition to starring as Ryan Kayes, O’Connell also created and writes the series, which is based on his memoir, I’m Special: And Other Lies We Tell Ourselves. It centers on Ryan, a gay writer living with mild cerebral palsy, who decides to tell his new co-workers that a car accident is responsible for his physical condition. At first, he feels liberated by hiding his disabled status in the closet, but then starts to feel ensnared in a trap of his own making.

Unless they decide to publicize viewership, it is difficult to predict whether Netflix will cancel or renew Special for season two. Generally speaking, when Netflix is going to renew, they do not drag out the process, probably largely because they don’t have to court advertisers. They can just look at their numbers and make a decision. Either way, I’ll keep a hungry eye on the trades and press releases and update this page with breaking developments. Subscribe for free Special cancellation or renewal alerts.

Update: Netflix has renewed Special for a second and final season.

What do you think? Are you glad that the Special TV show has been renewed for a second season? Are you sorry to hear that there won’t be a third season of this Netflix show?

I wish it will be renewed for a second season. I absolutely loved all of it. It was left on a cliffhanger for me. I binge watched it in one day. I love this show too much

Hoping Special will be renewed for second season. Funny, intelligent and loving show. We binged watched in two days.

This show HAS GOT to be renewed. Like Atypical, it is such an opportunity for the “normal” population to learn and understand what life is like for people with disabilities. Maybe people can learn to become more sensitive, apathetic, and accepting of those “otherly-abled”. It makes my heart feel good that shows like these are being made. PLEASE more seasons! P.S. I’m ordering Ryan O’Connell’s book right now!!

Please renew love it, simple easy to relate to and feels honest and real…

Pleaseeeee renew it I loved this show soooo muchhh

Loved it. Please renew this. It is wonderful.

Loved it. Would definitely be interested in watching more seasons of this show…

This show hit close to home which is why I would love a second season. It gave me all the feels. This show is inspiring!

Great show. Please renew for another season and more.

I do hope that there is a Season 2. This show is a keeper.