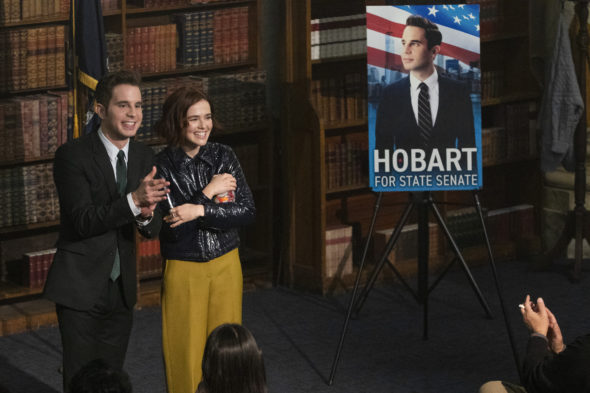 How far will Payton go? Has The Politician TV show been cancelled or renewed for a third season on Netflix? The television vulture is watching all the latest cancellation and renewal news, so this page is the place to track the status of The Politician, season three. Bookmark it, or subscribe for the latest updates. Remember, the television vulture is watching your shows. Are you?

Streaming on the Netflix platform, The Politician was created by Ryan Murphy, Brad Falchuk, and Ian Brennan. A dark comedy series, the show stars Ben Platt, Judith Light, Bette Midler, Gwyneth Paltrow, Lucy Boynton, Zoey Deutch, Julia Schlaepfer, Laura Dreyfuss, Theo Germaine, and Rahne Jones. In the first season, Payton Hobart (Platt) is a driven and wealthy student from Santa Barbara who’s always known that he’s going to be President of the United States one day. In season two, Payton fights to unseat Dede Standish (Light) in the New York State Senate race. As a long-time incumbent and greatly admired Senate Majority Leader with no-nonsense Chief of Staff, Hadassah Gold (Midler) at her side, Dede’s re-election was supposed to be easy, but Payton – who sees this as the next step on his path to the Presidency – must decide what kind of politician he ultimately wants to be in order to succeed. Meanwhile, his mother, Georgina (Paltrow), makes a momentous decision that threatens to upstage him and everything he’s hoping to accomplish.

Unless they decide to publicize viewership, it is difficult to predict whether Netflix will cancel or renew The Politician for season three. Given that the series comes from Ryan Murphy and is a pretty high-profile series, I think it will be renewed. Generally speaking, Netflix TV shows which are going to be renewed are usually picked up within a month or so of the series or season premiere. I’ll keep my ears open and an eye out for news, and will update this page with breaking developments. Subscribe for free alerts on The Politician cancellation or renewal news.

What do you think? Do you hope The Politician TV show will be renewed for a third season? How would you feel if Netflix cancelled this TV series, instead?

Something happened with the Politician writers in the second season. They were either told the production was over cost or that the ideas were running out, because the last show was a quick “wrap it up” job that was just too sacharine!!!