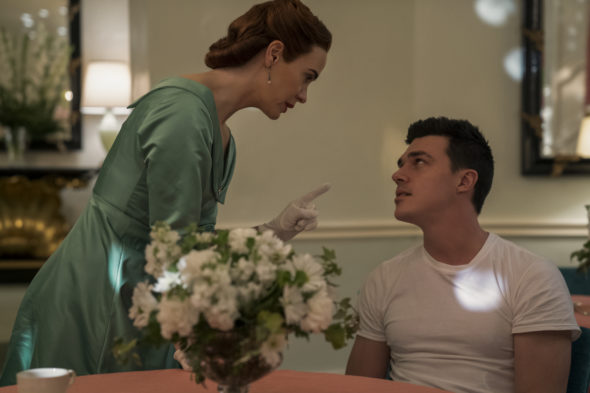 What makes this nurse tick? Has the Ratched TV show been cancelled or renewed for a second season on Netflix? The television vulture is watching all the latest cancellation and renewal news, so this page is the place to track the status of Ratched, season two. Bookmark it, or subscribe for the latest updates. Remember, the television vulture is watching your shows. Are you?

Streaming on the Netflix subscription service, the Ratched TV show is based on the character of Nurse Ratched from the One Flew Over The Cuckoo’s Nest novel. It stars Sarah Paulson, Cynthia Nixon, Judy Davis, Sharon Stone, Jon Jon Briones, Finn Wittrock, Charlie Carver, Alice Englert, Amanda Plummer, Corey Stoll, Sophie Okonedo, and Vincent D’Onofrio. The series was created by Evan Romansky and tells the origin story of asylum nurse Mildred Ratched (Paulson). In 1947, Mildred arrives in Northern California to seek employment at a leading psychiatric hospital where new and unsettling experiments have begun on the human mind. On a clandestine mission, Mildred presents herself as the perfect image of what a dedicated nurse should be, but the wheels are always turning. She begins to infiltrate the mental health care system and those within it. Mildred’s stylish exterior belies a growing darkness that has long been smoldering within, revealing that true monsters are made, not born.

We don’t have to wonder if Netflix will cancel or renew Ratched for season two. The streaming service ordered two seasons right out of the gate. It’s unclear if season two will be the end of the story. I’ll keep my ears open and an eye out for news, and will update this page with breaking developments. Subscribe for free alerts on Ratched cancellation or renewal news.

What do you think? Are you glad that the Ratched TV show has been renewed for a second season? How would you feel if Netflix had cancelled this TV series, instead?

The first episode was perfect,the others turned in trash marina the nurse into a kind of teenager in love,with the carácter of the secretary only acting as “the girlfriend”

What could have been a great drama or suspense series ended with cartoonish characters and other silly things that remind me more to American Horror Story than what is based the show. Also is almost laughable how assume everyone is gay or homosexual.

In the other i praise the performance of some of the actors\actress and o agree with Brook Welborn, the soundtrack was so Hitchcock, beautiful and haunting.

Loved it! Loved the Hitchcock psycho and vertigo soundtracks, was a great collaboration. Unique show and unbelievable cast! Couldn’t believe that the guy from law and order csi reminded me a ton of orson Welles! Judy Davis is, of course wonderful as usual!