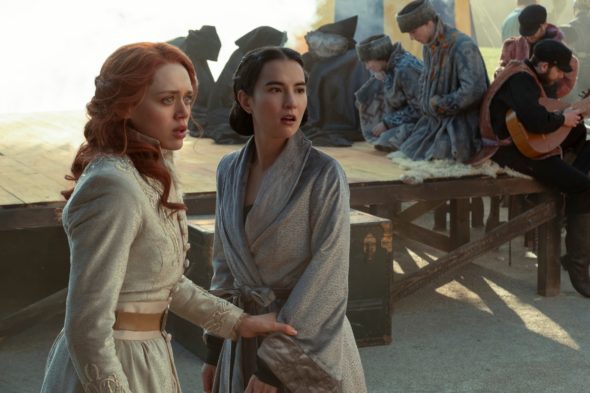 Will we see more of Alina’s story? Has the Shadow and Bone TV show been cancelled or renewed for a second season on Netflix? The television vulture is watching all the latest cancellation and renewal news, so this page is the place to track the status of Shadow and Bone, season two. Bookmark it, or subscribe for the latest updates. Remember, the television vulture is watching your shows. Are you?

Streaming on the Netflix subscription service, the Shadow and Bone TV show stars Jessie Mei Li, Archie Renaux, Freddy Carter, Amita Suman, Kit Young, and Ben Barnes. Based on Leigh Bardugo’s Grishaverse novels, the story finds us in a war-torn world where a lowly soldier and orphan, Alina Starkov (Mei), has just unleashed an extraordinary power that could be the key to setting her country free. With the monstrous threat of the Shadow Fold looming, Alina is torn from everything she knows to train as part of an elite army of magical soldiers known as Grisha. But as she struggles to hone her power, she finds that allies and enemies can be one and the same and that nothing in this lavish world is what it seems.

Unless they decide to publicize viewership, it is difficult to predict whether Netflix will cancel or renew Shadow and Bone for season two. Since Netflix isn’t ad-supported, it can take a chance on series it believes in but, sooner or later, it comes down to production costs versus viewership numbers. Generally speaking, Netflix TV shows which are going to be renewed are usually picked up within a month or so of the series or season premiere. Given the scope of this fantasy series and the fact that it’s based on popular novels, I think it will be renewed. I’ll keep my ears open and an eye out for news and will update this page with breaking developments. Subscribe for free alerts on Shadow and Bone cancellation or renewal news.

6/8/2021 update: Shadow and Bone has been renewed for a second season on Netflix.

What do you think? Are you glad that the Shadow and Bone TV show has been renewed for a second season? How would you feel if Netflix had cancelled this TV series, instead?