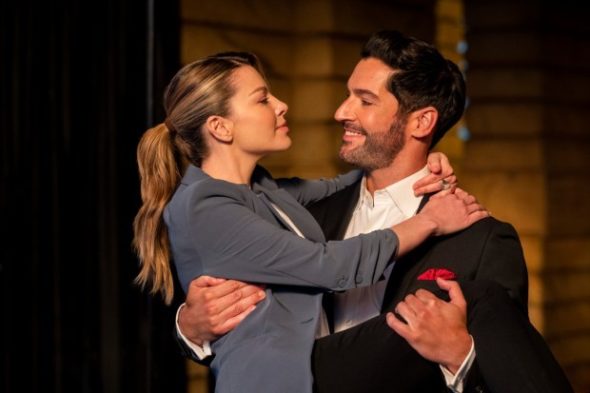 Is it the end of the road for this devilishly good series? Has the Lucifer TV show been cancelled?  Renewed for a seventh season on Netflix? The television vulture is watching all the latest cancellation and renewal news, so this page is the place to track the status of Lucifer, season seven. Bookmark it, or subscribe for the latest updates. Remember, the television vulture is watching your shows. Are you?

Streaming on the Netflix subscription service, Lucifer stars Tom Ellis, Lauren German, DB Woodside, Lesley-Ann Brandt, Kevin Alejandro, Rachael Harris, and Aimee Garcia, with Scarlett Estevez recurring. The supernatural procedural centers on Lucifer Morningstar (Ellis) who abandoned his throne, retired to Los Angeles, opened up a nightclub, and started helping LAPD Detective Chloe Decker (German) solve cases. In the sixth season, the devil himself has become God… almost. Why is he hesitating? And as the world starts to unravel without a God, what will he do in response?

We don’t have to wonder if Lucifer will be cancelled or renewed this time. It’s already been announced that season six is the end. But, is it really over? The series has been cancelled twice and I have a feeling that we’ll get to revisit these characters someday. I’ll keep my ears open and an eye out for news. Subscribe for free alerts on Lucifer cancellation or renewal news.

What do you think? Do you think that the Lucifer TV show should have been renewed for a seventh season? Are you sorry that this Netflix TV series has ended?

Lucifer keeps getting better with each season. Please renew it!

Please be a Lucifer season 7

Of course I want a Season Seven!

Everyone I know who watches–and that is a fairly sizeable group–wants a season 7 more than anything. What I’s also love to see is an actual “complete season 5” set available on DVD. Amazon and others are offering this but their complete season is only the first half of 5.