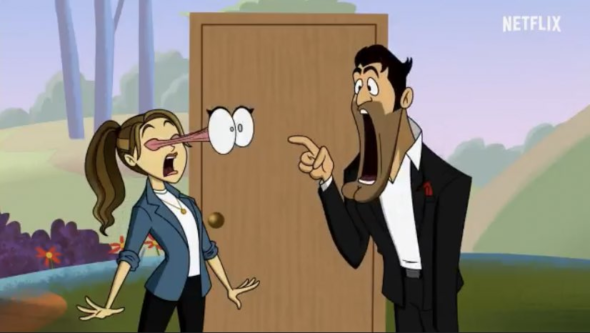 Is the sixth season a satisfying end to the Lucifer TV show on Netflix? As we all know, the Nielsen ratings typically play a big role in determining whether a TV show like Lucifer is cancelled or renewed for season seven (in this case we know season six is the end). Netflix and other streaming platforms, however, collect their own data. If you’ve been watching this TV series, we’d love to know how you feel about the sixth season episodes of Lucifer here.

A Netflix supernatural police procedural, Lucifer stars Tom Ellis, Lauren German, DB Woodside, Lesley-Ann Brandt, Kevin Alejandro, Rachael Harris, and Aimee Garcia, with Scarlett Estevez recurring. The supernatural procedural centers on Lucifer Morningstar (Ellis) who abandoned his throne in Hell, retired to Los Angeles, opened up a nightclub, and started helping LAPD Detective Chloe Decker (German) solve cases. In the sixth season, the devil himself has become God… almost. Why is he hesitating? And as the world starts to unravel without a God, what will he do in response?

What do you think? Which season six episodes of the Lucifer TV series do you rate as wonderful, terrible, or somewhere between? Do you think that Lucifer on Netflix should have been renewed for a seventh season? Don’t forget to vote, and share your thoughts, below.

A perfect ending to a great series. The writers have taken us on a wonderful journey with Lucifer as we have watched him evolve from a petulant child to an adult willingly fulfilling his destiny as the “Light Bringer or Bearer” to those who need it the most. Time travel is always a tricky thing to deal with as there are always inconsistencies and the writers handled that in a fairly reasonable way. It’s also great the way the writers tied the final season in the series to episodes in Season 1 such as “Favorite Son”. My favorite episode in… Read more »

I really want a season 7 I’m not ready to let this show end!!

Please bring it back with Season 7! Lucifer six was simply the best(c)

I’m a fan of Lucifer! Please bring it back with Season 7! Both Lucifer and Chole just started their Journey, don’t take it away!

Lucifer six was amazing please give us a lucifer 7

I loved Lucifer and I was a fan from the first day! I suffered withdrawal pains when it looked like it was cancelled for good! I was one who kept pressing/writing for it to not be cancelled. Thank GOD for NETFLIX! I haven’t finished the 6th season so the anticipation/anxiety is there again! AND ANTICIPATION is what makes me want to say, once Chloe FINALLY got together with Lucifer and accepted who he was, my excitement …can’t wait for the next week, became less. I flew through the 5th season in a weekend, hungry to know what happens next? Will… Read more »