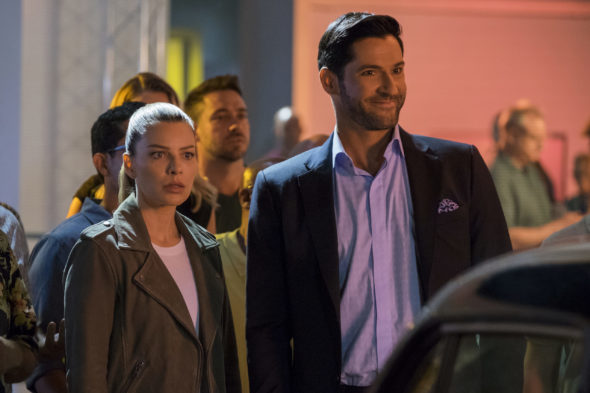 Lucifer living on past season five is looking more and more like a real possibility. Last week, the c-showrunners, Ildy Modrovich and Joe Henderson, both signed new contracts.

Now, Tom Ellis has reportedly signed his own contract extension, per TV Line. This means a season six renewal by Netflix is likely to happen.

The series still has a fifth season to air, and it will air in two parts, each containing eight episodes.

Netflix has not yet officially announced a renewal for Lucifer.

What do you think? Do you want a sixth season of Lucifer?

we really need Lucifer to come back. they all are terrific and just maybe their story about Lucifer can help our world in some positive way

Yes, I totally enjoyed every episode and would love to see a sixth season happen. The cast and writers are fabulous. I think Lucifer is a great show acting is superb! I’ll take more than six seasons!

Please let Lucifer have season 6 and beyond! My 83 year old mother and I enjoy watching the show together and it’s nice to see her laugh out loud. She and I enjoy all the antics and characters. It’s a great cast, the acting is A+ and it’s awesome story writing. Mom just binge watched all the episodes already. We are both eagerly waiting the 5th season to come out. We are currently rewatching the episodes again. Can’t get enough of Lucifer. You have 2 votes (that’s 4 thumbs up!) here for continuing the Lucifer series past a 6th season!!!

Would it be wrong to say HELL YES to more Lucifer.

Eternal Lucifer episodes please (I am willing to tape my eyes open if DVR no longer exists in the future!)

I love the show and will always be watching. So yes, I want to see more seasons of the show!

So looking forward to as many seasons as they produce. Love the show and the cast. The writing is phenomenal. So yes! More Lucifer please.

Great news! Congratulations to the wonderful cast and writers!

I think it’s great that there might be a season 6 of lucifer.i watched the series from the first episode and completely love the show