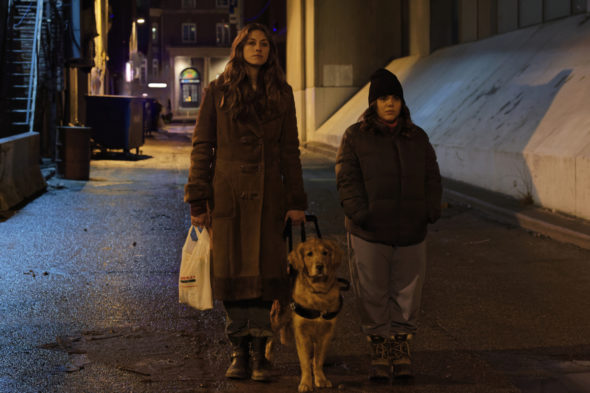 Just found this show and absolutely LOVE IT!!!!!!

DO NOT CANCEL, IN THE DARK!
IT IS MY FAVORITE SHOW!
LOVE THE ACTORS, THE BEST!

I am so excited about “In the dark” season 2.

In The Dark. Must never End! This is a fantastic show and even more amazing actors. Very talented are the entire crew from writers directors , “Pretzel”, everyone even the people that you never hear of that keep the entire family warm and hot coffee by their side. What’s most amazing is how well all the actors gel together complimenting teamwork at its best. Authentic, real personally touching to the heart. As I stated the entire team has a gift and I must say that Perry has a special, incredible talent. She worked so hard her entire life to play… Read more »

Another show that went under the radar for many that has it’s own unique feel that keeps it interesting and after the dramatic climax to season 1, we NEED at the very least a closure episode.

This was one of the best shows I have seen in a long time… I can not wait for season 2 !!!

We just started watching this yesterday and we can’t stop! Binging again today! Yay for season 2!

I am beyond thrilled that In the Dark is renewed for season 2. I was so pleasantly surprised and how much I loved this series, it’s literally one of my favs on Netflix, bring it back for as many seasons as you can! One HUGE favor please, find a way to bring back Casey Diedrick (Max) I love him and Murphy’s relationship. The show will not be the same without him back on it !!!!!

I’m ecstatic the show has been renewed. It is one of my favorite shows. You never know what is going to happen, and I love that. I wish we didn’t have to wait so long. Also, I hope it stays on The CW, as I don’t have Netflix.