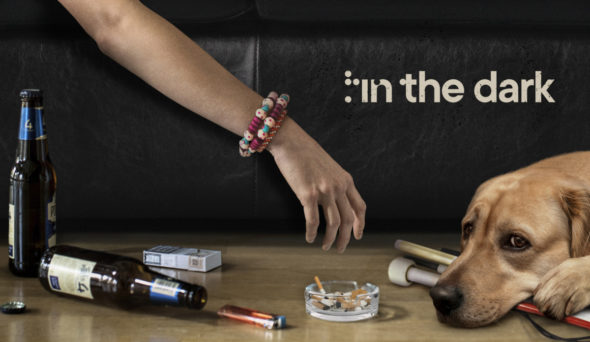 TV show description:
From creator Corinne Kingsbury, the In the Dark TV show is a comedy-drama centering on hard drinking and smoking Murphy Mason (Mattfield). As a blind woman, Murphy has a guide dog, Pretzel, but despite his loyalty, she resents his presence in her life. Murphy and Pretzel live with Jess Damon (Markham), Murphy’s supportive best friend.

Hank (Webster) and Joy Mason (York) are Murphy’s parents. They opened a guide dog school, in part, as a way to provide Murphy the opportunity to perform some meaningful work. Despite their hopes and expectations, Murphy primarily uses it as a crash pad, which doesn’t go over well with the school’s administrator, Felix Bell (Krantz).

After he saved her from a violent mugger, Murphy struck up a friendship with Tyson (Mpumlwana), a smart teenaged boy. Despite his sweet spirit, life has let Tyson down, and he earns his keep by dealing drugs for his cousin, Darnell (John).

One night, while walking in the alley behind their apartment, Murphy and Pretzel comes across what she believes to be Tyson’s dead body. When the police arrive on the scene, the body is not there. Although Dean Riley (Sommer) is a good and caring cop, with Murphy obviously in her cups, it’s hard to take her word for anything.

Broken hearted, Murphy is at risk of hitting a new low, but her desire to figure out what happened to Tyson keeps her going. Along with Jess and Pretzel, she sets out to uncover the truth. Murphy will do whatever it takes, even if that means cutting back on the booze.

What do you think? Do you like the In the Dark TV series? Should this CW TV show be cancelled or renewed for another season?

One of the best shoes we have watched! Please renew!

I love this show! I binge watched both seasons in 2 days… And waiting for next episode. Please, …SEASON 3 next!!!!

Love this show! Please don’t cancel!! Absolutely love how when trying to do the right thing, they all end up in so much more hot water….it’s so much fun to watch.

This is differnt kind of show and would like you to not cancel. I live the character’s in the
show is just different from all others.

This is a really good show. The actress who plays Murphy is awesome. So glad there’s a Season 2.

Keep in the dark on TV I’ve been to watch again . When does it return?

I really enjoyed this show. Lots of twists and tuns and likable characters. I hope you can renew it cause its fun to binge watch on Netflix..

I love this show!! So happy for another season.

I love this show, it’s quirky, raw and funny. I love Murphy and the dynamic between the other characters. Please keep it on.