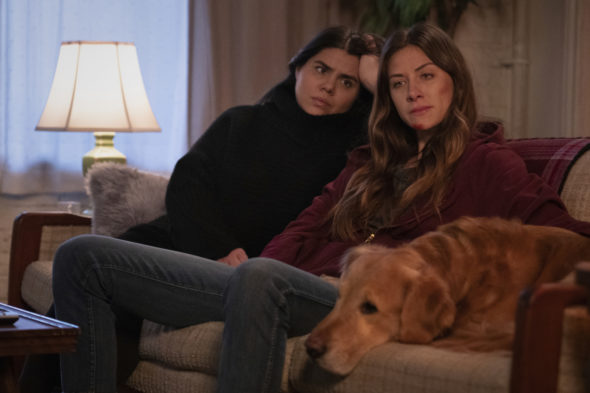 Viewers will be able to continue following Muphy’s unique life. The CW has renewed the In the Dark drama series for a fourth season which will air as part of the 2021-22 television season (September 2021 through August 2022). The third season will air at some point during the current 2020-21 season. It’s unclear how many episodes will be in either season but the show typically gets 13 installment orders.

The In the Dark TV show stars Perry Mattfeld, Rich Sommer, Brooke Markham, Casey Deidrick, Keston John, Morgan Krantz, and Theodore Bhat. In the series, Murphy (Mattfeld) is a messy twenty-something who struggles on a daily basis to balance her random hookups, her hangovers, and her drug front. She’s also blind. Murphy lives with her supportive best friend, Jess (Markham). Along with their anal-retentive boss (and sometimes a friend), Felix (Krantz), they run Guiding Hope, a school for guide dogs. But, solving the murder of Murphy’s best friend, Tyson, lands her deep in the world of Chicago’s underground heroin trade where she is forced to turn Guiding Hope into a front for a drug kingpin.

Airing last spring and summer, the second season of In the Dark averaged a 0.09 rating in the 18-49 demographic and 424,000 viewers. Compared to season one, that’s down by 45% in the demo and down by 33% in viewership. As live+same day ratings keep dropping for most network shows, The CW continues to focus on streaming and other revenue sources.

As part of the fourth season renewal announcement, Mark Pedowitz, Chairman and CEO of The CW network, said, “Though we’re just a few weeks into the new season, we wanted to get a strategic head start on next season with these early renewals, which allows our production teams to start laying out story arcs and hiring staff, and at the same time, continues to provide us with a strong, stable schedule to build on for next season.”

What do you think? Are you a fan of the In the Dark TV show? Are you looking forward to watching season three and season four?

I absolutely love In the Dark!!!! It’s one of the best tv series I’ve seen but I wish Murphy didn’t go to jail and her and Max got back together at the end of season 3. Guess we’ll just wait and see if it happens in season 4.

Love this show!. I finished watching season 3 last night. I thought that was the end but I just read it is to be renewed!! I normally don;t like these type of shows and rarely watch regular TV series. This grabbed me from the start with great acting and story line. It is adult, witty and gritty. I cried at the end of the last episode. Murphy will rise from the ashes (I hope)!!!!!

Love this show. Well written, intriguing, exciting. I hope they continue with it for a while

Eagerly awaiting season 4 of In the Dark. One of the best series I have ever viewed.