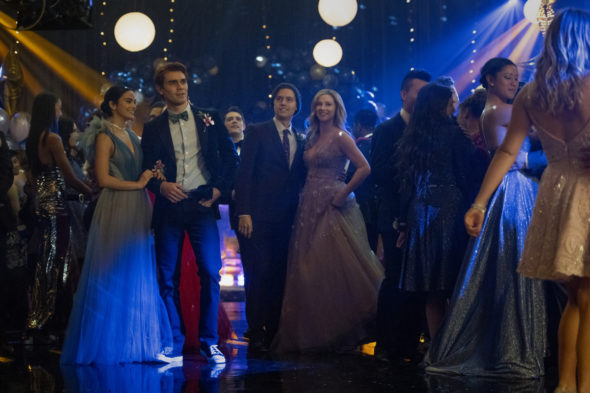 The gang is leaving Riverdale High but The CW isn’t leaving them. The smallest network has renewed the Riverdale TV series for a sixth year which will air as part of the 2021-22 television season.

A mystery drama series, Riverdale stars KJ Apa, Lili Reinhart, Camila Mendes, Cole Sprouse, Madelaine Petsch, Madchen Amick, Casey Cott, Mark Consuelos, Charles Melton, Vanessa Morgan, Erinn Westbrook, and Drew Ray Tanner. Based on the characters from the Archie Comics, this show focuses on the seemingly quiet town of Riverdale and some of its teen residents, including Archie (Apa), Betty (Reinhart), Veronica (Mendes), and Jughead (Sprouse). They discover the darkness and dangers that bubble underneath their town’s wholesome façade. In season five, the gang bids farewell to high school and, in some cases, to each other as many of the characters go their separate ways. Then, the story moves forward in time. The former teen classmates are now young adults who return to Riverdale to escape their troubled pasts.

Airing on Wednesday nights, the fifth season of Riverdale averages a 0.14 rating in the 18-49 demographic and 573,000 viewers. Compared to season four, that’s down by 39% in the demo and down by 22% in viewership in the traditional ratings. As live+same day ratings keep dropping for most network shows, The CW continues to focus on streaming and other revenue sources.

What do you think? Do you still like the Riverdale TV series? Are you glad that it’s been renewed for a sixth season? Should that be the end?

I’ve really liked Riverdale up until the current season. It’s totally lost its way. I’m no longer invested in any of the characters and there’s so little conflict and drama that I yawn all the way through. I don’t know what can save it, but I hope it can get back to its former glory and survive

I love the Riverdale series. Please don’t cancel it.

But why the short season….?

I enjoy Riverdale and I’m a grandma! Glad the CW is keeping it on!

Me too! I think it is fun & different than most shows on tv these days!

Agreed! Read the comics, love the show & I’m 33, yet my 16yr old daughter used to love it but unfortunately 3rd season turned her off and I have been trying to win her back ever since! Lol I’m a Riverdale Fan!

I love this show and I am a senior. It is a thrill it has been renewed.