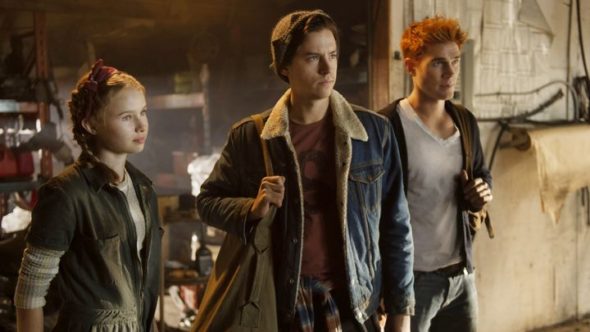 The Archie characters have been around for more than 75 years in the comics and now we know their Riverdale TV show isn’t going anyplace either. The network has announced that the TV show has been renewed for a fourth season which will be part of the 2019-20 broadcast season.

A CW live-action Archie Comics adaptation, Riverdale stars KJ Apa, Lili Reinhart, Camila Mendes, Cole Sprouse, Marisol Nichols, Madelaine Petsch, Ashleigh Murray, Mädchen Amick, Mark Consuelos, Casey Cott, Skeet Ulrich, and Luke Perry. The third season kicked off with a dark mystery the parents have been keeping a secret, since they were in high school. Meanwhile, Archie (Apa) has been framed for a crime he did not commit, and the new prosecutor, Ms. Wright (Penelope Ann Miller), is gunning for him with gusto.

The third season of Riverdale is averaging a 0.44 rating in the 18-49 demographic and 1.28 million viewers. Compared to season two, that’s down by 11% in the demo and down by 7% in viewership. The show is one of The CW’s higher-rated series and the network has announced another related series may be on the way. There was no question that it would be renewed.

Today, The CW also announced that nine other TV shows had been renewed for the 2019-20 season: Arrow, Black Lightning, Charmed, DC’s Legends of Tomorrow, Dynasty, The Flash, Legacies,  Supergirl and Supernatural. The fates of All American and Roswell, New Mexico have yet to be announced.

What do you think? Do you like the Riverdale TV show on The CW? Are you glad that this series has been renewed for a fourth season?

I LOVED season 3!!! Season 1 was great and season 2 was ok then season 3 started off wierd and then got so good I couldn’t help but watch every episode!! I recommend watching all episodes after about episode 4 it gets good. 5 of 5 stars, can not wait for season 4 because the ending left me wanting more!

Season 3 was awfully dark. The Archie comics was more upbeat and actually fun to read. Maybe Season 4 can be less murders and drugs. Everyone has dark secrets but no one ever gets turned in. No justice served.

This show needs to be cancelled for our sakes. It doesn’t even make sense anymore. I stopped watching at season 3 episode 3 because it was becoming ridiculous with cringey lines and bad acting. Season 1 was the only season worth watching. Please make it stop CW!!!!!

I am so excited that Riverdale is coming back for a fourth season. Christina despite what you think you should really watch the entire third season of Riverdale because it really is excellent and none of the acting is at all bad, and if it seems like it is that is just for dramatic effect.

I agree with Carolyn. Finish it, it’s very good. I kinda thought it was gonna suck then it got so good I couldn’t quit watching, now the suspense is built up and I can not wait for season 4!!!

I love Riverdale! I’m a 68 year old grandmother and used to buy the Archie comic books when I was young. Very cool how all the chaRACTERS HAVE THE NAMES AND LOOKS OF THE COMIC BOOK CHARACTERS. haven’t MISSED AN EPISODE!!

The 1st season was great. The 2nd season was OK. This 3rd season has been awful. The show is not getting better with time, but worse. Hopefully, with season 4, they fix that

I completely agree with you, loved season 1. Ever since Hiram came in it’s been all downhill since then. I’ve only watched the first episode of season 3 as it was a chore to get through and i’ve heard nothing but bad things about the rest of it.

I personally loved it. Just get through the first couple episodes it’s pretty good. Honestly kinda reminds me of season 1 after the first maybe 4 episodes, the only complaint I have is I have to wait for season 4 to understand the end completely.