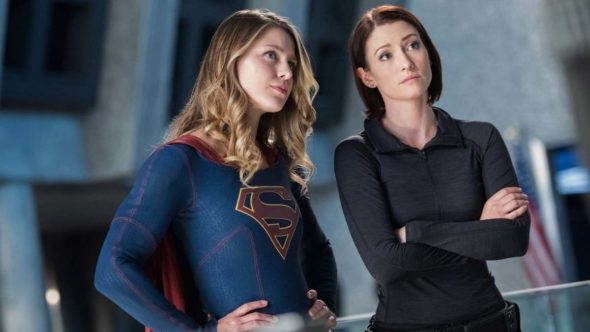 Kara’s schedule isn’t going to be getting any less hectic. The CW has renewed their Supergirl TV show for season five which will air as part of the 2019-20 broadcast season.

A DC Comics-inspired action-adventure drama airing on The CW television network, Supergirl stars Melissa Benoist, Mehcad Brooks, Chyler Leigh, Jeremy Jordan, David Harewood, Katie McGrath, and Jesse Wrath. The series centers on Kara Zor-El (Benoist), the cousin of Kal-El, i.e. Superman (Tyler Hoechlin). To remain safe from Krypton’s destruction, Kara grew up on Earth, as Kara Danvers, a human. For years, she kept her powers a secret. Now, as an adult, she works at CatCo Worldwide Media and also for the Department of Extra-Normal Operations (DEO), a super-secret government organization whose mission is to keep National City – and the Earth – safe from sinister threats.

The fourth season of Supergirl is averaging a 0.39 rating in the 18-49 demographic and 1.33 million viewers. Compared to season three, that’s down by 24% and 28%, respectively. The series has done well for the network, particularly as it helped to establish a new night for The CW.

Today, The CW also announced that nine other TV shows had been renewed for the 2019-20 season: Arrow, Black Lightning, Charmed, DC’s Legends of Tomorrow, Dynasty, The Flash, Legacies, Riverdale, and Supernatural. The fates of All American and Roswell, New Mexico have yet to be announced.

What do you think? Do you like the Supergirl TV show on The CW? Are you glad that this series has been renewed for a fifth season?

Fantastic show! Episode S4-21 might have been the best all season. I can’t wait until S5!

Cancell it… This SJW show has run a ground!!

Wow, even with steadily decreasing ratings they renewed the show. It’ll be interesting to see how they eventually handle all these super series…will there be a point when they have to cancel some of them? or will they dump them all at the same time? Nothing lasts forever. Imagine how good Supergirl’s ratings would be if they didn’t alienate every non-liberal by beating the alien/immigrant metaphor over your head for 60 minutes every week.

The show changed nights to Sunday which probably increased the ratings for that night.

Supergirl is awesome Tony -n- I LVE – “SUPERGIRL” it’s great an special there is gonna be Season 5!

pretty sure the season 5 is in Supergirl extras tv show…

I want Supergirl too. But PLEASE BRING MON-EL BACK!!!!! I know a lot of people who stopped watching the show just because he left, and I am about to if he doesn’t come back next season. I mean, in the last episode of season 3, he gives her the legionnaire ring and says to contact him if she needs him. But still, she hasn’t. It’s pretty annoying.

Bring Mon Back?? Could be interesting if a Baby is Produced between them to continue the Supa Legacy – Leaving aside the Imagery of the baby being born potentially looking like a Scene from Alien, one has to wonder what the Ability of the Bub would be, Would it be susceptible to both Kryptonite and led, or the immunities of the parents would insure against both, Would it have super powers, Being both conceived and Raised under our yellow sun? Mon was a Bit Player, a Love interest that from the start would not have gone anywhere, Kara being the… Read more »

Supercorp for life! It would be interesting to see him back though.

I am very happy to find out, that Supergirl has been renewed for the, 2019-2020 season (fifth year). It is one of my favorite shows on TV. And I haven’t missed an episode from the very beginning.

I wish the supergirl seasons will return since they have to put a small clip of Lena Luthor using the rock for something. I just hope that season 5 will update.

Pleased Super Girl is returning. Love the characters and the writers do a great job. Thank you CW for renewing.

wait there is a season 5 for Supergirl!!!

I’m ready for this show to be over. I didn’t mind the feminist undertones in the 1st and 2nd seasons but it’s been progressively getting worse at shoving it down your throat. Additionally, closer to the beginning of the current season the way they portrayed the disappointment that the President had to step away due to being an alien and that it wasn’t fair because she was doing a good job was the last straw for me. I watched the big crossover event recently and found they are really hammering in the feminism even more. Just unnecessary. There are other… Read more »

Show may be too PC, but I don’t mind, I mean, when I stared to watch it, I knew they gonna do that, and honestly not all messages are bad, and yes they push feminism too hard to this point that they harm dialogs. But story is still interesting, especially in 4th season 🙂