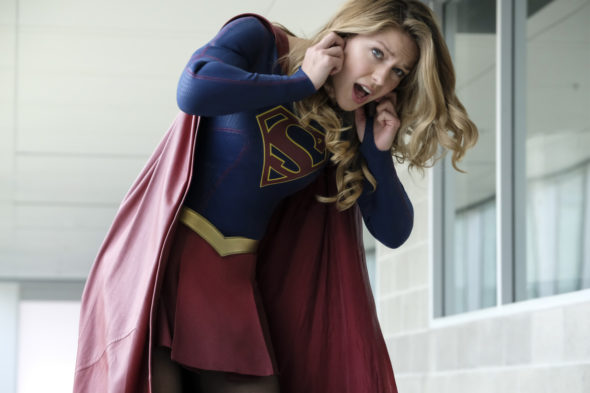 How super-powered is the fourth season of the Supergirl TV show on The CW? As we all know, the Nielsen ratings typically play a big role in determining whether a TV show like Supergirl is cancelled or renewed for season five. Unfortunately, most of us do not live in Nielsen households. Because many viewers feel frustration when their viewing habits and opinions aren’t considered, we’d like to offer you the chance to rate all the Supergirl season four episodes here.

A DC Comics-inspired action-adventure drama airing on The CW television network, Supergirl stars Melissa Benoist, Mehcad Brooks, Chyler Leigh, Jeremy Jordan, David Harewood, Katie McGrath, and Jesse Wrath. The series centers on Kara Zor-El (Benoist), the cousin of Kal-El, i.e. Superman (Tyler Hoechlin). To remain safe from Krypton’s destruction, Kara grew up on Earth as Kara Danvers, a human. For years, she kept her powers a secret. Now, as an adult, she works at CatCo Worldwide Media and also for the Department of Extra-Normal Operations (DEO), a super-secret government organization whose mission is to keep National City – and the world – safe from sinister threats.

What do you think? Which season four episodes of the Supergirl TV series do you rate as super, stinky, or so-so? Should The CW cancel or renew Supergirl for a fifth season? Don’t forget to vote, and share your thoughts, below.

1/31/19 Update: The CW has renewed the Supergirl TV show for a fifth season. Details here.

It’s good to see that super heroes can be not only men, but women. We live in a world where we are all equal. If it’s gonna be cancelled it would be tragic for me. For me personally, women characters as super heroes are really important because when I see super heroes are being played by women, I look up to them. In my eyes Supergirl is a role model and she gives me the idea of thinking about myself as strong, smart and beautiful. I just hope that this show will not be cancelled because it means a lot… Read more »

Yeah, writing has gone from good to just horrible. Plots are less than paper thin. Just doing whatever they want, even if it makes zero sense. The director is doing something illegal but we have to follow orders and do it. Wait, what? No that’s exactly the opposite of what the UCMJ says. Oh, wait they aren’t military they haven’t been trained about illegal orders. Two minutes later there’s the Coln supposedly quoting UCMJ as the reason Alex must follow her illegal order… Come on if you can’t find a plausible reason for your story to go down the way… Read more »

I love the direction this show has taken this year. People want to complain that the show is political – politics is everywhere so why would it not be in the city in which a TV show takes place, especially one that deals with morals. This show is handling the political climate very well and is trying to display all points of views – people just have to be willing to open their minds to see it. This show stresses love not hate, the importance of family, seeing all views of a situation, always putting your best foot forward and… Read more »

supergirl w/out a doubt is the coolest most entertaining exciting hit television series on television by far along w/the other dc arrowverse shows on the cw supergirl is putting the cw on the map it should definitely get a early pick up 5th season renewal by the cw mid season this year and hopefully it will continue on for several super seasons after that on the cw last night was one of the best episodes yet!!!!!!!!

Joe, I agree with your comment! Supergirl, along with all of the other Arrowverse programs, are absolutely awesome! I too, hope they go on for several more seasons. As far as I’m concerned, all of them get five stars! 🙂