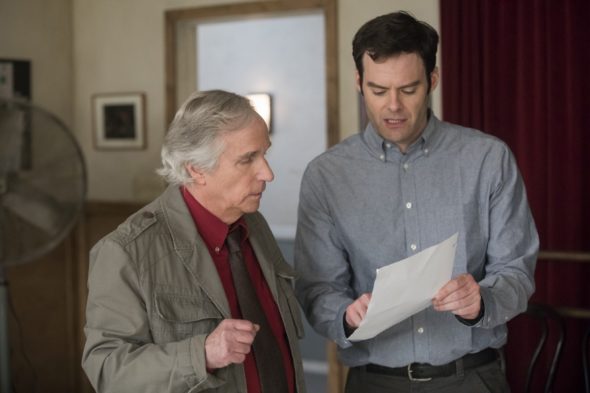 How smooth is Barry Berkman’s new life path during the second season of the Barry TV show on HBO? As we all know, the Nielsen ratings typically play a big role in determining whether a TV show like Barry is cancelled or renewed for season three. Unfortunately, most of us do not live in Nielsen households. Because many viewers feel frustration when their viewing habits and opinions aren’t considered, we’d like to offer you the chance to rate all of the Barry season two episodes here. *Status update below.

An HBO sitcom, Barry stars Bill Hader, Stephen Root, Sarah Goldberg, Anthony Carrigan, and Henry Winkler. The dark comedy centers on Barry (Hader), a Midwestern hitman. After Barry travels to LA and takes an acting class with Gene Cousineau (Winkler), he falls in love with the craft and wants to change careers. In season two, Barry is trying to extricate himself from his old life. .

What do you think? Which season two episodes of the Barry TV series do you rate as wonderful, terrible, or somewhere between? Should HBO cancel or renew Barry for a third season? Don’t forget to vote, and share your thoughts, below.

Too funny love it so good love it not big SNL fan hate anti Trump Hopefully new good usually it is interesting.

I didn’t care for Bill Hader on SNL, mostly because of Goat Boy character but WOW, his talent breaks through loud and clear in Barry!!!! He writes and portrays this funny/tragic character beautifully and I’M astounded by his broad talent in Season 2 Episode 5 which was his in every respect-acting, writing and directing. Just fantastic. This show should be receiving huge praise. And the casting is exquisite. You’d think I know Bill Hader from this review but I don’t. This is a far cry from Goat Boy. Congratulations and thank you for an intelligent, funny, tragic show. May it… Read more »

Bill Hader was not Goat Boy. That was Jim Brewer