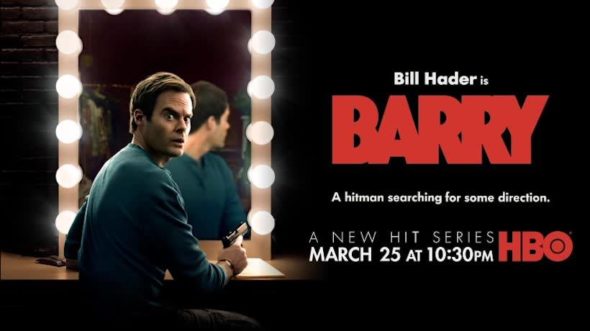 Aside from IFC’s Documentary Now!, since leaving Saturday Night Live in 2013, Bill Hader has mostly stuck to voice work and film. Now he’s back with the first season of the Barry TV show on HBO. Is this dark comedy the right vehicle to showcase his talents and keep him as a series regular? Will Barry be cancelled or renewed for season two? Stay tuned.

From creators Hader and Alex Berg, Barry centers on Barry Berkman (Hader), a Midwestern hitman. The HBO sitcom also stars Stephen Root, Sarah Goldberg, Glenn Fleshler, Anthony Carrigan, and Henry Winkler. When his handler, Fuches (Root), loans him to Goran Pazar (Fleshler), of the Chechen mob, Barry travels to Los Angeles. There, he follows his target to Gene Cousineau’s (Winkler) acting class, and soon falls in love with the community and the idea of a whole new life. **Status update, below.

What do you think? Do you like the Barry TV series? Did you think HBO would cancel or renew it for a second season?

I am anxiously waiting the shows return

Love the show glad to hear that it is being renewed. Bill Hader has exceeded expectations.

Henry Wrinkler is this new show and Barry on HBO at 10:30 on Sundays night need more both shows renewed darn funny actor.