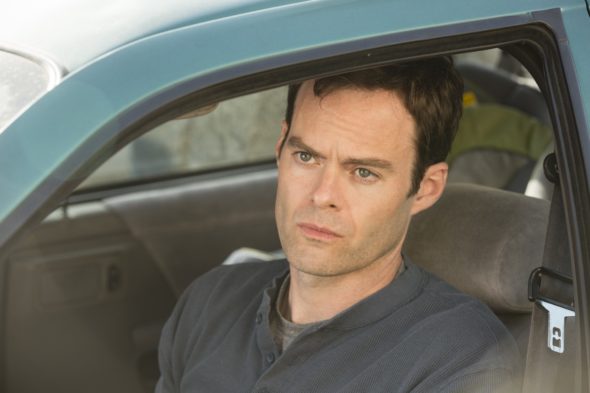 TV show description:
From creators Bill Hader and Alex Berg, the Barry TV show is a half-hour sitcom. The dark comedy centers on Barry Berkman (Hader), a Midwestern hitman. When his handler, Fuches (Root), loans him to Goran Pazar (Fleshler), of the Chechen mob in Los Angeles, Barry feels drawn to acting.

Barry is in L.A., because Pazar’s wife is having an affair with an aspiring actor. When Barry follows his target to Gene Cousineau’s (Winkler) acting class, he is immediately drawn to the whole group, and to Sally (Goldberg) in particular.

Barry keenly desires to start over in this new community of creatives, but there seems to be no way to leave the mob. Can he find a way to lead both lives? Stay tuned.

What do you think? Do you like the Barry TV series? Should this HBO TV show be cancelled or renewed for another season?

Anthony Carrigan is just amazing on this show! I suspect Noho Hank was supposed to be a throw-away temporary character, but everyone loved him so much that now he’s in danger of taking over the show (like Villanelle on Killing Eve)

Brilliant. The only show I am looking forward to watching new episodes.

Started to watch out of curiosity about how the writers would handle such a unique subject. Discovered a first class series from every aspect. Writing, acting, originality, cast, combined with a clever and often hysterically twisted sense of humor with the Chechens is the perfect combination. The encounter Barry has with the Tae Kwan Do expert and his daughter was one of the funniest I can ever recall. Writers have a way of keeping the viewer off kilter throughout. Very very clever. Please do not think about cancelling. Plot resolutions have to be made and don’t deprive us of the… Read more »

LOVE BARRY!!!! New favorite comedy!! NoHo Hank is HILARIOUS!!! (He could have his own spinoff! Henry Winkler is wonderful! Hope show is around for a long time the writing is great! Good job Mr. Hader!

Love this show! One of my favorites!

Barry, a quirky and engaging tv show that deserves a second series.

I LOVE BARRY. The best season cliffhanger EVER. When can we all look forward to Season 2?