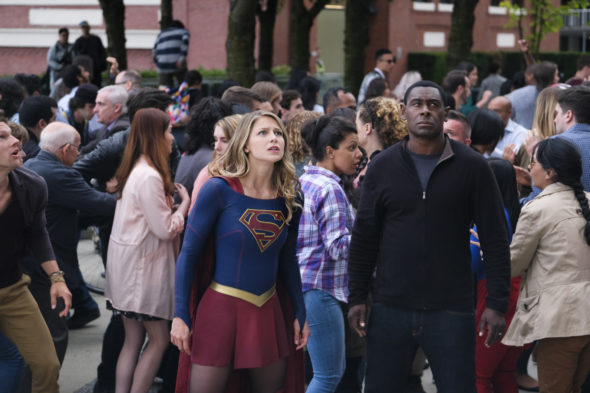 Supergirl and cast should remain they are exceptional. Enjoy them all please keep the cast on!!!!

Did they change writers? The direction of the story has changed. Trying to push to many platforms. Go back to just entertainment

Loved the first season. endured the second season. stopped watching halfway into season 3 episode 1. Too many political agendas all leaning to one side. No thanks.

they way it end with Mon-El and Winn leaving to go to the future i hope that means there the be some type of new spin off i hope it will be a legion spin off or return for a fourth season of supergirl..

Well I was a huge fan but had to stop watching episode 319 due to the racism agenda once again being exploited and shoved down our throats! SERIOUSLY?!!!! I watch make believe so I don’t have deal with all the ugly!!!! You can’t change the past and constantly bringing it up will NEVER allow the world to progress and move forward!!! How about showing more love and how ppl get along! I hope the series is cancelled! Way to ruin it!

No I don’t think so

that is amazing if it got renewed

Supergirl is the worst. Super-entitled-whiny-millennial-girl is more like it. Such a crybaby. Cancel it. Cancel it with a vengeance!

Other reader
Reply to  Reader

Best, most accurate description of the show. Cancel it.

Good show. I’d like to see it renewed. No warning; you people just pull shows off whenever you want! “break for holidays”; holidays have been over for a long time! You could at least have told folks it would be back on after a break like other stations did with their shows. I am really pissed about that!

Supergirl has finally been renewed.