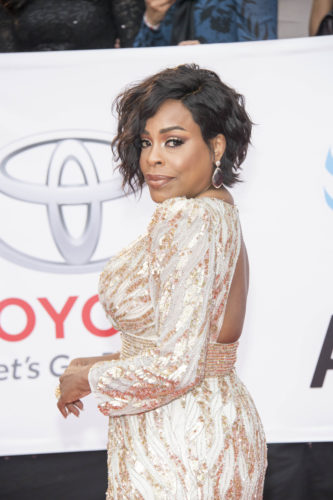 The Masked Singer is headed into the production for its fifth season, but viewers will see a different face hosting the FOX competition series. Regular host Nick Cannon has tested positive for COVID-19.

Instead of delaying the start of filming, comic actress Niecy Nash is taking over hosting duties for a few episodes, until Cannon is cleared to return. She appeared on the FOX series last season as a panelist. She has also appeared on the network’s I Can See Your Voice.

Variety revealed the following about the move by FOX:

“Nash will take over as guest host as production begins this Thursday on Season 5 of The Masked Singer, and until Cannon is ready to get back to work. Cannon is currently in quarantine and resting.”

Jenny McCarthy Wahlberg, Nicole Scherzinger, Ken Jeong, and Robin Thicke are all returning as panelists for the highly-rated music competition series, which finished airing its fourth season in December.

An exact premiere date for the premiere of The Masked Singer season five has not been set, but the series is expected to return at some point in March.

What do you think? Are you a fan of The Masked Singer on FOX? Do you plan to watch season five?

I wish they would keep her instead of bringing Nick Cannon back. Why is everyone giving him a pass on his behavior when they hold everyone else’s feet to the fire?

I love Niecy. Looking forward to seeing her host.

I love the masks singer. I can’t stand the two women that judge on there or whatever they do but it’s a best show on TV

Get well Nick, no one can host this show like.