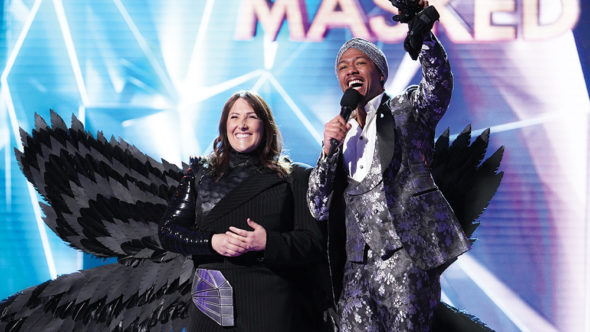 FOX is striking while the iron is hot. This season, the network had the breakout hit of the season with The Masked Singer series. The celebrity singing competition was renewed for a second season back in January and now, FOX has ordered a third season of the series.

Both seasons will air as part of the 2019-20 television season. Season two will begin airing this fall, on Wednesday nights. Season three will premiere on February 2, 2020 and will follow Super Bowl LIV.

A game show based on a South Korean program, The Masked Singer features competing, singing celebrities. Nick Cannon hosts, with Jenny McCarthy, Nicole Scherzinger, Ken Jeong, and Robin Thicke serving as panelists. Celebrities go head to head in a singing competition, with a major twist: each performer is completely disguised in a fantastical costume, in order to conceal his or her identity. Each week, after the elimination, the departing singer reveals just who was making music behind the mask.

What do you think? Did you watch the first season of The Masked Singer on FOX? Do you plan to watch the new seasons?

I had a blast watching this with my family and trying to figure out who the masked singers were. We did pretty good and guessed 3 of them.

I’m very happy for this show….. It’s really fun trying to figure out who is who!!

Absolutely loved the show the concept is great.
My whole family tries to guess whom are the singers. Can’t wait to see it again. Excellent choice of host and judges and getting audience involved.