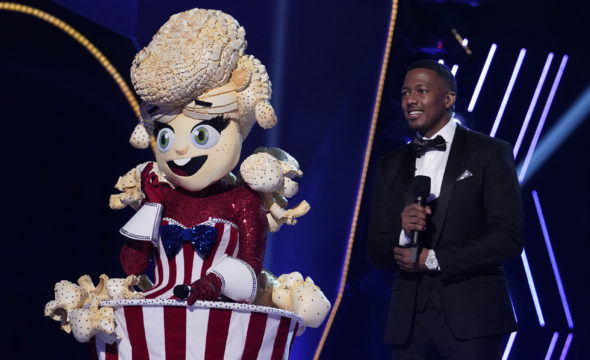 This show hasn’t hit any sour notes for FOX. To no surprise, the network has renewed The Masked Singer for a fifth season which will air sometime in 2021. It’s unclear if season five will air in the spring, as part of the 2020-21 season or, if viewers will have to wait until next fall.

A costumed singing competition, The Masked Singer is hosted by Nick Cannon and features panelists Jenny McCarthy, Nicole Scherzinger, Ken Jeong, and Robin Thicke. The show features celebrities facing off against one another with one major twist — each singer is covered from head to toe in an elaborate costume, complete with a full face mask to conceal his or her identity. With each performance, the host, panelists, audience, viewers and even the other contestants are left guessing who is singing behind the mask. The costumed characters in season four include Baby Alien, Broccoli, Crocodile, Dragon, Giraffe, Gremlin, Jellyfish, Lips, Mushroom, Popcorn, Seahorse, Serpent, Snow Owls, Squiggly Monster, Sun, and Whatchamacallit.

FOX has renewed the hit celebrity competition series THE MASKED SINGER for a fifth season, it was announced today by Rob Wade, President, Alternative Entertainment & Specials, FOX Entertainment. THE MASKED SINGER Season Five will air on FOX in 2021. On tonight’s special two-hour Season Four semi-finals episode, airing from 8:00-10:00 PM ET/PT, the top two singers from each group are featured, as they battle for a spot in the season finale.

“I’m so happy to announce a new season of THE MASKED SINGER,” said Wade. “This show brings joy to so many families across the country, especially during these trying times, and we can’t wait to get even more celebrities suited up in crazy costumes for an hour of pure fun every week.”

In tonight’s all-new semi-finals episode, the top two celebrity contestants from each group come together for the first time as the “Super Six,” competing for a coveted spot in the season finale. Craig Robinson (host of THE MASKED DANCER) joins the desk as a guest panelist. It’s CROCODILE vs. SEAHORSE, MUSHROOM vs. JELLYFISH and SUN vs. POPCORN in the high-stakes two-hour episode that will leave three unmasked, and three moving on to the season finale airing Wednesday, Dec. 16 (8:00-10:00 PM ET/PT) on FOX.

Catch up on the current season of THE MASKED SINGER with On Demand, FOX NOW, Hulu, as well as on FOX Entertainment’s streaming platform, Tubi.

What do you think? Do you enjoy The Masked Singer TV series? Do you plan to watch season five on FOX?

I like to see more singers compete – not athletes. Even lesser known singers but singers. How about Elliot Yamin, from Idol or some of the top 5 from the Voice. There are so many more out there.

I wont watch again unless Nick Canon is removed.

I love the Masked Singer and I’m very happy to hear it has renewed for
Season 5.

I am glad that Fox renewal the show for a new season.

Another insipid show renewed for another year by Fox. What has happened to the mentality of television viewers in the United States.