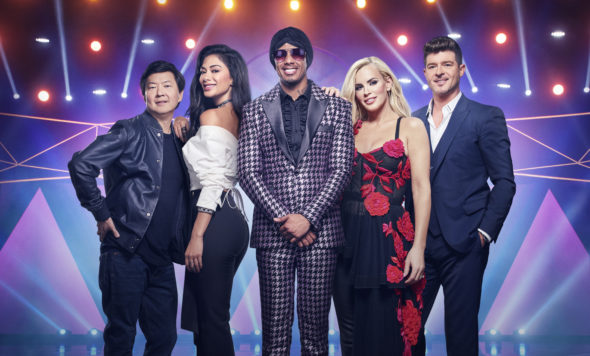 The celebrities go head to head in a singing competition, with a major twist: each performer is completely disguised in a fantastical costume, in order to conceal his or her identity. Sometimes, they drop hints about their identities and at other times, they try to throw off the panelists, as well as the studio and home audiences.

Each week, after the elimination, the departing singer reveals just who was making music behind the mask. Celebrity singers include singers and musicians, athletes and more.

What do you think? Do you like The Masked Singer TV series? Should this FOX TV show be cancelled or renewed for another season?

Masked Singer should be renewed. It is entertaining and is
revitalized by changes in format. Hope it makes the 10 year mark!

I hope Masked Singer gets renewed . I remind me of Masquarde Party .

I never liked the show. I kept watching because I loved nick as host.
After his racial comments… I’m done.
He tainted the show. As well as my opinion of him.
He should’ve never been allowed back.
Why should he be “forgiven” and and still get that big fat paycheck ? While many others lose their jobs for less offensive comments?
Buh bye
The demise of this show is way overdue

I’m a fan of the show, but the Host is a flat out racist. Should have been fired. So I won’t be watching it anymore.

I love The Masked Singer . It reminds me of Masquerade Party in 50s when famous stars would come out in disguise and panel also stars had to guess who they are , like What’s My Line ?

was this show affect by coronavirus?

Our family is addicted to this show! An excellent family show and we really get into trying to guess the singers.

This is the stupidest show ever along with Big Brother and Survivor and other reality shows. When is the age of the reality shows going to be over. I can’t stand them anymore.